For this recording the band has built a professional homemade studio inside an old church in the small town of Maurik, located in the south of Holland. With the help of producer Atti Bauw (producer of the band’s 1998’s How to Measure a Planet?) the band plans to work there for a month before heading to Bauw’s studio to mix and master the music.

Comments singer Anneke van Giersbergen about the constructed studio and working with Bauw again, “We built our own studio there because we wanted to do something different and create a new atmosphere. As for working with Attie Bauw, he is a very inspirational man with great ideas and we were very anxious to work with him again. I like being in the studio especially because we are then together for a vast period of time as a group and we create something entirely new. It's always amazing to participate in this process and to finish with a brand new album. That sense of accomplishment is truly wonderful.”

She adds, “We would hope to see the album get released sometime in March (under license by Sanctuary Records in Europe, The End Records in North America).
We plan to start touring in March and to tour in South America, the U.S.A. and Northern Europe during spring.”

In February van Giersbergen gave birth to her first child, a boy named Finn. The singer welcomes the changes being a mother brings to her and her songwriting. “Being a mother has changed a lot for me and obviously everything I do or go through will somehow end up in a lyric or a song, but I haven’t written any mother-baby songs --- yet!” she laughs. “My views on life are the same as before I had my baby boy, they are now just so much stronger. So if anything, my contribution to the band’s music and the music we create together will be more powerful because of these new experiences.”

In other recent news THE GATHERING just world wide released their double-DVD, "A Sound Relief". The two-disc set features a live concert the band recorded on May 23, 2005 at the famous Paradiso in Amsterdam, plus bonus extras like the band's own tour impressions caught on video, video interviews and a bonus disc showcasing a collection of beautiful 3-D animation clips. 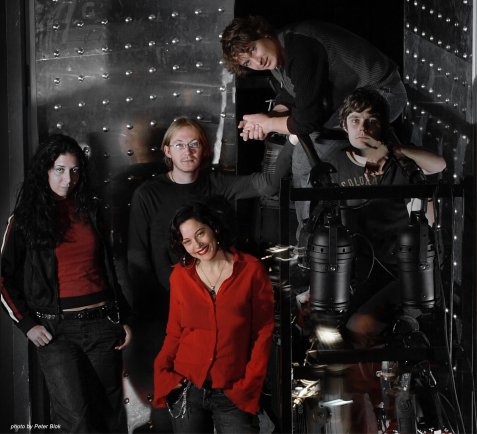 The Gathering - photo by Peter Blok