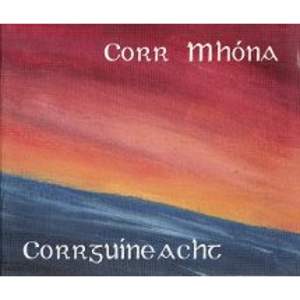 The Irish band “Corr Mhóna” was founded in 2008 in the city of Cork. The band uses the ancient Irish language, Gaelic, as their main concept. They images and ideas in their lyrics are all about old Irish spirits, the environment and other personal stories. Looking at it, a snapshot sequence of the movie "Brave Heart" is running through my head. But that is not the same story with their music.

I understand that it's really hard for an unsigned band to release a big production album, but it's unlikely that a band that promotes itself all around the world will sound like they do. This album has a very low and amateur production. In a time when every sixteen year old can set a nice studio and produce a decent album, you would expect something more from a band. The other problem is their singer. I’m not so clear on who is in charge on the vocals as all three guitarists are listed on the vocals too. The clean vocals are also poorly done. The guy has a lot of work to do on his voice. Unlike the clean vocals, the growl section is pretty good. It seems that this band is trying to over show their Irish roots and the fact that they are the only band in the metal world that sings in Gaelic. Well, I think I got that from just reading the name of the band and album. I don’t need anymore reminders for that. The concept of it is really cool in my opinion, but I don't need the whole "Brave Heart" feel they inject in every song. It could have worked easily with just the growl singing. I think it would have presented the idea really well.

So I’m talking about a death metal album, that tries to combine the Irish-oriented music in with technical death metal aspects. I hope that they will find some record label that will help them to enrich their selling points. Their concept is great, and you have bands like Orphaned Land that have made these concepts a success.