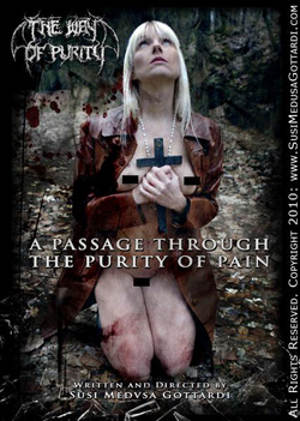 A band that was bonded to god by blood has lost its way in the woods Europe. They discover an abandoned house and in it they find and old tape recorder. When they play it, the sounds of a woman that lived in the house and committed suicide back in 1972 fill the room. This is the idea behind their first album, a concept album. Sounds obscure, doesn’t it? I’m sure that most of you are scratching your head and thinking: WTF? So did I. Frankly I haven’t heard or seen something so ridiculous since I watched Immortal running in the forest for “Call of the Winter Moon VC”, which nearly sent me to E.R just from laughing.

The Way of Purity, out of Sweden, combines black with grind core and doom metal. I must say that their music sounds pretty good. It’s not very unique, but well written and well executed. They never show their faces; always covered with masks (I’ve seen it before somewhere). They want to spread the words and glory of Christianity (been there at some point too). And, they are using animal guts to increase human spirituality, or something like that (that’s a first…). They say that they are not some kind of organization, but rather a bunch of individuals who actually care about man kind. Al Qaida also said that and look what happened with them!

Their decision to immortalize their vision in a DVD that tells a story is bad choice for two reasons: first, you don’t make a DVD after your first release, unless you are Iron Maiden (which they are not). Even Maiden didn’t do something like that at the time. Secondly, this is a low budget movie and it looks bad.

The suicidal girl has to run naked and fulfill the ultimate black metal cliché (Cradle Of Filth anyone?). The horror effects, such as the blood, are as convincing as a Steven Seagal’s movies (killing a guy by yanking on his ear?), and the band members play themselves- not exactly the Broadway cast you were hoping for.

The Way of Purity presents themselves as a visionary band in a materialistic world, and it seems that they take it pretty seriously. So maybe they should do a black metal Western Spaghetti movie. Their music sounds good as it is. Many bands have done concept albums and just wrote about it in the album booklet. It’s a nice formula and it works pretty well. So I say, stick to the music and leave the DVD for those that have real vision!