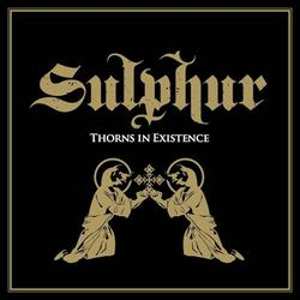 Although they are coming from the cold Nordic black metal scene, Sulphur's Thorns of Existence can easily be located on the edges of the central European death metal scene. Not to worry, Sulphur is without a doubt a black metal band, but their second album is not just endless grind machines and the cold atmosphere of the Nordic forest filled with crows and witches. You can easily hear that the band's influences are not based on Immortal and Emperor. I can recognize aspects of the Polish Behemoth or Vader among others in this record. It is a nice fresh look for black metal.

Also, it is nice to see a black metal band from Norway which doesn't declare the corpse paint as a birth mark on their faces employ decapitated goat heads. As far as calling themselves progressive black metal, I think they live up to it.

The songs in the album are pretty complex as far as progressive black metal goes. It's not like the black metal Cynic or the overloaded material Mayhem spills out every now and then, but the fact that it's not forty minutes of endless grind with some synthesizer sparked my interest. And then I realized that there is more. The band plays all kind off riffs from Fear Factory to the Israeli Orphaned Land, everything under the umbrella black metal fuse.

So yeah, don't put this record on as background music for your Sunday breakfast with grandma...

Sulphur was founded under the name "Taakeriket" way back in the mid nineties. In 1997 they went off the grid for a few years. After a few line up changes, the band managed to release a demo which got them a deal with the French Osmose Productions. In 2007 the band released their first album, but during the recording of "Thorns..." the two parted ways, and Sulphur found itself signing with Dark Essence Records.

It is significant that the band members are not strangers to the studio . This album is well recorded, and the harmonies between the instruments are perfect. Timing is everything, and Sulphur's got it. The sequence of the album is another issue that I've kept in mind. It is built in a way that grabs you by the balls, but will let you breathe when you don't have enough strength in your voice to scream for help so you never get too bored.