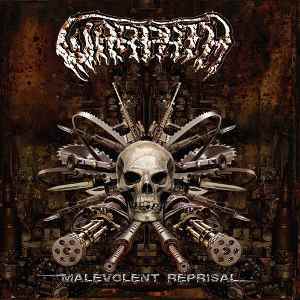 Open your eyes, ears and guts. Something good is happening on the whiskey island. The Irish metal scene has grown, and so has its music. I hear more and more bands from there, and I can count only a few that has not exceeded my expectations.

The Irish brutal band Warpath is a great example of the mutant-type bands we've been seeing in past few years. They feature a combination of styles from the extreme side of Death Metal to its counterparts. It's difficult to create, unless you really know what you're doing.

With Warpath, you've got some Cannibal Corpse, a cover for Hatebreed, Napalm Death and tons of speed and intensity that will rip your head off. If you are looking for the real stuff with no melodic bullshit, straight forward hard ass death metal- you've got it.

Now, before you go running to your local record store, let me tell you a bit more about the band. Warpath came to life in 2005 and this is their second album. If you look them up, you'll find another two bands with same name. They are both thrash bands, one from Germany and one from England, so make sure you get the right one. I don't really get how they can keep the name considering the legal issues, but hey…that's their problem. I'm just here for the music.

Warpath's music is defiantly kicks ass, but it is not anything new or refreshing in the genre. I will mark that the production is great, blowing your speakers. The guys are great players and they stick to their own style.

Like most of their blast beats team mates, Warpath's lyrics are very diverse but share an overall theme. If it's about bloody battles that only Irish people can share about, the cold gloomy mind of a serial killer, or the long spine tingling description of a firing squad execution (It's amazing that one shot can be recreated into a 5-minute song and still maintain the horror and excitement). You won't get any "I don't have a job" or "life sucks" type of songs, nor a ballad to consider playing at your wedding (unless your girlfriend has a Goreguts tattoo).

Warpath is a standard death metal package. It's not revolutionary nor is it something you haven't heard already. Warpath has that strong vibe that makes you roll. All they need now is to keep rolling.