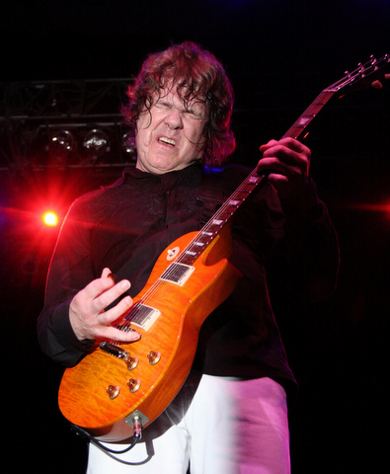 Things have been really hard lately, so much work to do. So much work that I barley had time to stand up and salute to one of the greatest guitarist that ever lived on this planet- Gary Moore. I consider his death as semi rock star kind of death. He died from a heart attack (unlike the usual types of death in this genre- drugs, alcohol, car accidents), but still died at the hotel in Spain. So ill give him the credit for that. He was 58 on the day he died, a real guitar legend.

Moore was born in Belfast, Ireland. A place that was most influential to bands from Ireland. Moore was dealing with the war and bloodshed that his nation has experienced through his lyrics. His musical journey began when he moved to Dublin at the age of 14, and began playing the guitar. He got together with band Skid Row (not to be confused with the 80's glam band) and released a few albums with them. Ultimately he got the attention of Thin Lizzy's lead singer, Phil Lynott. Thin Lizzy was already gaining moderate success in the British isles as well as in Europe. When the offer came, Gary jumped on it. He had replaced one of the founders of the band- Eric bell, and found himself in a band at a starting point of their glory days. Although he gained commercial success with Thin Lizzy, Moore left the band only a year later, to start a prolific and long lasting solo career. He remained close to Lynott and until his death at the end of the 80's, they collaborated so many times that a lot of people considered them as the founders of Thin Lizzy.

After starting his solo career in the mid seventies, Gary became one the worlds most known lead guitarists. In 1978, together with Lynott he released the song "Parisian Walkways", a song that became one of rock's and electric guitar best anthems. With the 1980's rising metal force, Gary so it was time to express his love in the more metallic way. Throughout the decade he released several "pure" heavy metal albums. His song "Out in the Fields" from the album Run for Cover (1985) was the one that introduced Gary Moore to me. I was 14 years old, and watching Friday Rock Show with the late Tommy Vance. The songs music video came on. I kind of liked it, but then Gary started his solo. It was a moment I will never forget, because it was the first time I got to see such a great guitar player from a close shot. The camera was situated on the head of the guitar, filming downwards to the neck, and on the neck was a mind-blowing guitar solo. Luckily I got to record the whole show (on VHS, there was no DVD back then) and the next day I just kept watching it over and over again.
This music video made me realize that that's what I wanted to do; I wanted to play just like this guy. He became one of my inspirations for guitar playing and the love of it. Since then, each time I hear and recognize one of his solos, it fills me up with joy and excitement.

The end of the 80's brought heavy metal to a diminishing point, almost to its total devastation. Gary had decided to return to his origin, the Blues. In 1990 he released Still Got the Blues which became his top selling album to date. The album, enriched with blues songs, was combined with rock and some heavy metal. The album got him back onto the world stage and high up on the play lists. This album also had collaboration between him and legends such as Albert King, Albert Collins and George Harisson.


During the 90's, Moore continued with the Blues, releasing several studio albums along with live records. One collaboration with Blues giant B.B King produced a video of a live show with the two stars.
The beauty in Moore's playing is that feeling he gives you when watching him play. He plays with all of his heart, puts everything into the music. It seems like he literally rides a solo like an experienced rider on his horse. It has an incredible sensation of power mixed with emotion and depth that only he could pull out of the Gibson Les Paul (one which he got from Fleetwood Mac's guitarist back in the sixties, and kept till his death). On many of his albums you can see his face in that typical expression- so concentrated on his solo, doing a harmony or just making a never ending guitar band. Only he knows how to do that. Simply amazing!
An interesting point throughout his career is that he was known as one of the best guitarist in the world and somehow he never made it big in the US. My guess is that now, like all of his predecessors; He will be embraced also by American fans after his death.

The remainder of the founding generation of rock is declining. Those who didn't die from one of the rocks death myths are facing rocks greatest enemy- getting old. Gary Moore died at the age of 58. you can say he was young, but in Rock n' Roll years, he was not just old, he was ancient. Yes, there are some legends still living. Some are well known, some are not, but let's not forget one of the greatest guitarists that ever lived. A man that defined the concept of guitar hero.