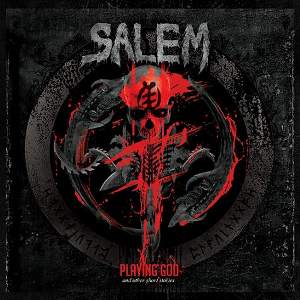 Salem's 7th release includes a 25-year anniversary for the oldest metal band in Israel.
Though it has been a long road for the band, it seems that Zeev Tananboim and his band mates have still got a few aces hiding up their sleeves. In this title, Salem interpreted stories from their everyday life to a death metal album. It might sound a bit awkward that I'm mentioning this because you have tons of bands doing the same thing all over. So here's what's new under the hot Israeli sun: Salem added a short description or an explanation to each song. It explains what the song is talking about, and why they have chose a specific title. So they actually created a soundtrack for their lives. Now that's pretty different! The song "The Privileged Dead” is a reconstruction of the classic Kreator song, "No Reason to Exist". It's not a cover of the song or anything like that. They just took the idea behind the song and made a continuation of it in their own style.

The album has 12 tracks and a bonus song, which is all in Hebrew. It tells the story of Isaac. There is also a very interesting cover to Bob Marley's Exodus. Like the rest of the album, the band took the original song and molded it into a unique metal song, with tons of double bass drum and distortion. The rest of the album is filled with interesting stories. "I Hate Pigs" talks about the band's hatred towards squealing lead singers of metal bands. "Drums of the Dead" talks about a side-kick character in the Hellboy comics series. I'll stop here, and leave the rest of the stories for you guys and girls, but I would like to say again that its nice to see how these stories ended up as a death metal album!

Approaching their music, it seems like Salem is concentrating on their drums section more than anything else. The album is filled with African drums along Nakav's amazing drumming abilities. But aside from that, there is not a lot space for the rest of their instruments. There is, of course, Tananboim's voice, but that has been there for 25 years. You find many guitar solos, except one in "The Downfall of Paris Part 2", which are not the so-called classical guitar solos. The rhythm guitar is fading away at certain points. Well, then again, it could have just be me searching for that old 80's metal style…

In addition, Salem has built a long prolific relationship with Nakavs wife, Christin, as the female/ back round vocals. She is a very unique vocal talent in heavy metal. She's not an opera style singer, and it doesn't sound like what Paradise Lost are doing in their songs. She is just standing on a spot that I can only describe as a Pink Floyd back round singer only metal. On top of all that, there is the unquestionable lead singer, Zeev Tananboim, with his unique Israeli accent which is really easy to recognize, and giving the band another unique affect in the death metal wave. He has been the voice of this band for 25 years, and you can hear the experience in his voice.

So this is a salute to Israel's oldest metal band that can still manage their stronghold pretty well. They are not afraid of changes, and will stick to the formula that will guarantee them the dollar bill. They care about their music.