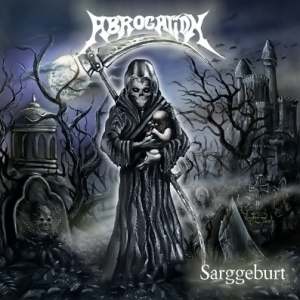 Apparently, oldschool black/death metal isn't as dead a genre as some may claim. In this German band's case, with their 4th studio album out now, not only is the genre alive but is also kicking pretty hard. Fans of older materials, such as Burden Of Grief and the kind of metal that was released on cassettes, will rejoice over "Sarggeburt".

Abrogation combines the European type of melodic death metal (as apposed to the brutal American type) with hints of traditional melodic black metal of the northern regions. Their blend of Death and Black metal is led forward by the guitars and vocals. These guitar parts are mostly good (standouts include the opening title track, "Seelenverkäufer" and "Das Schwert des Propheten") yet there are a few parts that stick out of the pile in a bad way; at times the focus is lost, so some parts might sound off-genre thus creating dissonance instead of diversity.
Shcwarte's deep growled vocals, with lyrics revolving around medieval times and typical anti-Christian topics, are such a fresh breath of oldschool air that the fact he sings in German doesn't damage any of the experience.

Two songs worth special mention are the ballad "Hans Eisenbeiss" which gives a well-deserved acoustic rest from the entire racket, and its follower "Eisenmütze" which closes the album as a mid-tempo epic celebration of metal the way it used to be.

Having the guitar and vocal parts on such a front location of the mix leaves the bass lines and drums in the background. This leads to the following conclusion: the thing Abrogation really lack and need is a producer with a fair amount of vision and skill. By thickening the slightly thin-sounding guitars and MIDI-sounding keysboards and by bringing Doe's excellent drumwork to a more upfront position in the mix one can ultimately provide some guidance that will maximize Abrogation's potential to not only appear on a stage at Wacken, but to be of the headlining stage by the time their next album is out. The only thing missing is some cosmetics, and not the type put on as corpse paint.