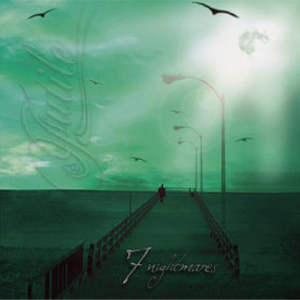 This is Futile's 2nd album, and I can only say that I'm really disappointed that didn't get to know them before now!

Futile was founded in 2006, in the city of Palatinate new Karsruha in Germany. So far, they have released an EP and a full length album. Their music stands on the border between progressive rock and metal. Basically it's modern rock with some elements of metal, and let me assure you, these guys know what they're doing!

Their music is easy to relate to. Oliver Ranack has a voice that can easily make you cry or hypnotize you. The guitars are shifting from one melody to the other in a perfect synchronization. There is also the fine drumming added by Patrick Spotca that can maneuver from a ballade to killer metal double bass licks filled with tons of emotion. Yes people, we have here a romantic double bass!

This is a concept album that mainly talks about nightmares. Like its name the album contains seven songs, each representing a different nightmare. There is no main character that lives in these nightmares. It's just seven selected nightmares that the band has decided to focus on. I don't think those guys ever have regular dreams at night…

This album is short (only 33 minutes) but has a lot of high quality components. Though the band has not been around for very long, you can't really hear that in their music, and I can easily compare them to the big guns in their field. They have a very modern sound, which is very Americanized. All of the instruments are synchronized in perfect harmony. Rapt with Ranack's voice, the listener is sliding quietly but deeply into the nightmares. One side of Ranack's voice keeps the listener safe from the nightmare and guides him through it, as he observes it. You need a special talent to do something like that, and Ranack delivers it throughout the album.

This album is for those who like progressive rock with the crashing metal elements. Or on the other hand, if you're tired of Glen Benton's Growling, and you want something a bit softer, this is a nice new addition to you collection. Generally speaking, I recommend this album to everyone!