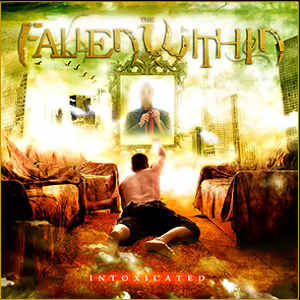 The Fallen Within - Intoxicated - [Coroner Records]

Lately, there is a new disease around Europe, and it has nothing to do with pigs. The Swedish melodic death metal flu has infected bands around the continent.
The Athens based band, The Fallen Within, was created in 2003 by guitarist Gio S. The band is mix of American metalcore and Swedish melodic death, or as they call it: modern melodeath. After a few line up changes and a demo CD ("The Conqueror Worm") they are releasing their first full length album: "Intoxicated".

What's interesting in this album is that the band has managed to overcome the standard sound of the genre, to create a new sound, define them as pioneers of a death metal style.
The difference between this band and their predecessors could be deduced by two major breakthroughs:
1-Steve More, synthesizer, has done a great job on this album. His way of playing has added a different atmosphere to the songs. Unlike most bands, I can't see a clear pattern in his playing and the effects he adds to this album. You can here a neo classical piano in one song (Sound Of Destruction), and a 1950's science fiction movies sound in the next(Endless Reality). Very creative!
2-The combination between the clean and growl voices of the lead singer, Steve Al. unlike most bands, Al has managed to forgo the average lead singer part, and plays well with the two types of his vocalic ability.

This album has all of the elements from both genres. You have some great groove metal riffs, along with off- beat songs. All are well-written and well-produced. At this point, I want to stop and think about the last song on the album, Timeworm. It is a one minute instrumental song, that emphasizes the abilities of Steve More but has nothing to do with the rest of the album. I don’t see these guys as jokers or the type to leave hidden messages, so I really don’t understand what its all about.

Nevertheless, Intoxicated is a wonderful album and I hope that, in next one, the band will try to stretch the limit of their creativity a little bit more. I think they have many more refreshing surprises to add to this genre.