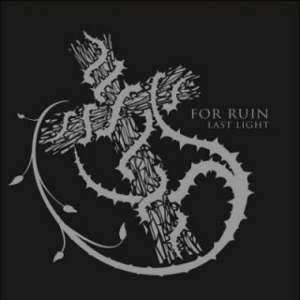 For Ruin - Last Light - [Self Release]

I would like to start with a little confession: I don't like black metal., and I never have. The concept of this genre, along with the never ending grinding drums, is bit too much for me.
All of the stories about burning churches, killing your friend and colleague to the band, and the story of Varg Vikernes mail-bomb to Ze'ev Tananboim (the lead singer of Israel's Salem), has only furthered my reservations regarding the genre.

With all of my biased thoughts, I was expecting to devastate "Last Light", but boy was I wrong!
For Ruin was formed back in 2003 in Ireland. The four piece band took the old-school black/death metal path and followed bands like "AMOPRPHIS" and "DEATH".
After releasing their first LP, titled "DECEMBER" in 2007, the band signed on with the Irish company: "SACRIFICE RECORDS". For some strange reason, the band decided not to renew their contract and have recorded their new album by themselves, in a home studio.
It is this reason that the sound in this album has the old school stench. Don't get me wrong, I love it, but I have to start with the only bad thing in this album (the usual one): the lead singer. I think that John Murphy has a great voice, but it was very hard to distinguish between him and the rest of the instruments. It felt like this was the only thing that was needed to make this album a classical black/death metal album.

Aside from that, the album is amazing! The band has prevailed and outgrown the infinite grind sections which are well known in black metal and instead opted for wonderful twin guitar melodies. Also, there is variety among the songs, as not all of them were made for the endless whiplash loops. For the first time ever, I found myself sitting down and excited to listen to a black metal album.

This album is for fans of all genres, from melodic death metal, to melodic black metal, or grind, you get the whole Christmas package here (only Santa has some horns on the top of his head). I think that if this album was created some 17 years ago, it would be considered a classic.

For Ruin has managed to change my point of view on this scene, and to finally see that there are black/death metal bands out there, that are worth looking into.
I really can't wait to hear about their next album!