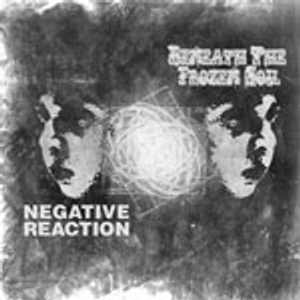 It is rather uncommon in this day and age to see split albums, especially one coming from a dramatic blackened doom metal band and a filthy sludge band delivering some of the heaviest and darkest outputs around. The surprise mists away by the great walls of sounds Sweden's Beneath The Frozen Soil and NY's Negative Reaction build in this one-off split under the boutique label TotalRust Music.

The split is carefully cut into two separate parts, the first being BTFS's share, where they deliver muffled, h-e-a-v-y guitar driven tracks such as "The Wretched Of This Afterbirth" or "Signs Of That Grim Malady", add some nuances of whispering Novembers Doom-like vocals along with a string section and a touching piano in "The Time Is Now", and finish their part with the resonance of "So Still So Overwhelmingly Silent"; one with great bass presence, an epic ending riff and in fact the only new song in their case here. Beneath The Frozen Soil actually re-recorded an old acclaimed demo of theirs, "The First Wreath", polished it up and served it in its new package. Their half of the album comes with a bitter taste, for two reasons: one being since vocalist Buster Sporrong has chosen to depart from the band some time ago, and the other being the fact they show some potential but don't seem to take use the full amount of their musical talents to produce a piece that actually matters in the dark and gloomy world of doom – where most things have been done, and done well.

The other half is clearly the stronger side of the split, where well-based sludge kings Negative Reaction deliver what brings to mind the likes of Grief or Sleep, with great emphasis on bass lines from the cesspools of New-York. They are anything but timid, and spare no amp or microphone in "Shroud". The two parts of "Origin Of Hurt" really set you off on a trip to places you're not too sure you wanna go to, they kinda give that paranoia feeling you get when you're over-baked. Meaty riffs, chugging bass lines, standout vocals and tight drumming make all the different between other doom/sludge rookies and walking gods like Negative Reaction.

To sum all the kind words and less-kind words, I'd recommend it to whoever is into all the grey zone between doom metal and sludge – anyone liking the good-old-stuff would be delighted with both parts, and would surely be delighted even more to hear that NR are planning to release another full-length by the end of the year. A double edged sword for experienced listeners in the shape of a split CD doesn't come by everyday, cherish the opportunity.