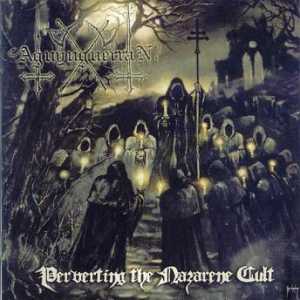 Though the debut album by this Belgian black metal band, the members résumé is quite impressive, formerly and currently playing with such names as Belgium's Enthroned and Iconoclasm.

After trying to decipher the band's logo for about an hour, I was free to be impressed by their fantastic cover artwork, it all sat down well with the musical content of the album, bare-boned and stripped down black metal, without the frills and ornaments that some bands tend to dirty their black metal with.

There a definite melodic approach, these guys know their instruments and use them well, but as clear from the opening title track, the band's aim isn't to beatify things too much, it's dark, heavy and aggressive, and though the sound is clear, it isn't grandiose or epic, it's just enough to let the riffs and relentless drum attack shine through while the hateful vocals are screamed out.

For added ambience the band does throw in some darkened passages such as the intro and the atmospheric Nazarenus Perite, which is followed by one of the strongest cuts in here, the well-written Epitome Of Your god, and that is another facet that makes this album work.
The album even ends on a high-note, with a cover of Nifelheim's The Black Slaughter, which serves to demonstrate the band's stripped-down attitude to their craft.

Anyone into basic, well-written black metal should try them out, but those into more melodic, goth-tinged contemporary bands should probably stir-away, this is as pure and refined as any an old school black metal album.