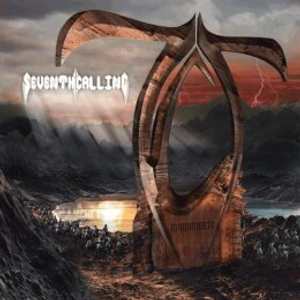 US melodic metallers Seventh Calling were born from the meeting of two veteran guitarists, Lance C. Lange and Steve Handel, their debut album is a solid slab of melodic metal, with some power, prog and thrash elements thrown into the mix into something which may seem undefined genre-wise, but it generally very well put together and quite interesting.

The band's strength lies in the solid guitar playing and some good songs, combined with powerful melodic vocals and a good sense for writing hooks, they mostly brought to mind a combination of Iced Earth, with some thrashier elements, a slower tempo, and some atmospheric keyboards.

Now, the weaker bits on the album are few and far-between, the sound is one. It's all right, but still quite raw, something which prevents the finer points of the band's music from shining out. The guitar leads would sound better, as would the drumming. It's not enough to hinder the album too much, but a crisper, clearer sound would do them some serious good.
A second thing is the use of the slower parts in the band's music, the keyboards and strong vocals bring in enough atmosphere, and the slower bits just come off as unnecessary most of the time. The times the music really works are the ones in which they lay on the aggression and pour on the speed. Tracks such as Faces Of Deception and Dead Mind's Eye are good examples of just how good can the band sound when they go for a full throttle approach.

Not a perfect release, but a worthy one nevertheless, there are not enough classic metal bands active these days in the US, and it would be a shame if the great tradition started by such great bands such Crimson Glory and Helstar would die out. Seventh Calling are on the right path, with a bigger budget and some tweaking, they have the makings of a great band indeed.