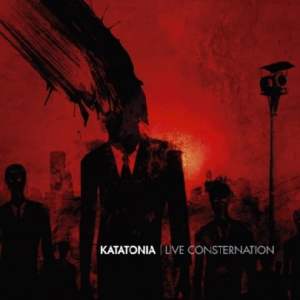 A summer's night dream; come true to some lucky metalheads at 2006's SummerBreeze open air festival in Germany. Where metal and beer lovers meet, with all the partying and aggressiveness going around in such fests, there must be a need for some realistic somber soothing melancholy to balance things up. "Live Consternation" is a simple documentation of that August 17th show, with no superfluous special additions – just the DVD, an audio CD of the show and more of Travis Smith's captivating artwork. Not after the money, Katatonia release this live album as more of less the first live album by them in their 11 years of existence (since 1996, when the band reformed in its current outfit), having seven full-length albums released prior to it rather than impertinent bands releasing even two live-DVD's between albums.

The show opens with a string/keyboard intro; not hinting those who didn't peek at the tracklist or the crowd what the band is about to open with, leaving 'em in suspense, and throwing the excellent "Leaders" from the band's latest spine-chilling offering "The Great Cold Distance" to crack open the show. It's no coincidence too, for the song opens that very album as well. Unexpectedly, "The Great Cold Distance" doesn't dominate the set, and leaves a lot of room for more unlikely choices, which makes the setlist interesting; you'd expect to have a majority of songs out the band's latest album or hear 'hits' like "Teargas" or "Chrome" out of 2001's "Last Fair Deal Gone Down" or "Evidence" and "Sleeper" out of "Viva Emptiness" yet instead Katatonia chose to please the crowd doing a short festival-setlist with just three more songs out of TGCD, "Had to (Leave)" & "Right into the Bliss" (out of 1999's "Tonight's Decision") and "Wealth" & "Criminals" (out of "Viva Emptiness") completely ignoring their successful "Last Fair Deal Gone Down". The least surprising choice is a rather good, yet somehow lacking, performance of "Ghost of the sun" off "Viva Emptiness" and the most surprising being a denser, less depressed, version of "Cold Ways" (off their 1998 doomy "Discouraged Ones") as apposed to the thinner gloomy original, who left more room for feel, and that's also the earliest in material Katatonia agree to go and do these days.

"Wealth" is a great choice to carry "Leaders"'s momentum; Daniel Liljekvist goes wild on his drum kit while Jonas's vocals are pretty high on the mix/balance, but that's understandable considering he sings all in his blurry high clean voice (backed by growls from Anders Nyström occasionally) and he ought to be heard through the distortion walls. Follower "Soil's Song" has Renkse inflaming the crowd with some kind words, leading into one of the better songs off TGCD. The short setlist may seem like a downside at first, with just 11 songs, but given a spot at a packed-with-good-bands festival and wishing not to overstay their welcome in our DVD players that is also welcomed.

Katatonia's live sound is quite different from the band's tightly-produced, clear-cut, recorded sound. Kinda bare boned, as if giving you a glimpse into how the songs were written, fitted with different elements that go well together, it shows that this band has a beating metal heart under all the protools. It's coherent in composition, rather than just via production. They're professionals, no doubt about that.

To fans, this DVD/live CD is a must to be put right next to "The Great Cold Distance" album. What bugs the non-fan DVD viewers is the lack of "show", the fact the band comes and does (well) what it should do but gives little added value to the show as a live stage act. Not to say Katatonia's members are catatonic, but it's not amazing. Though considering Katatonia's current materials, it's quite fitting; they're not the wild doom/death metal band they were in their previous incarnation (1991-1994), but rather an atmospheric-melancholic-doomish-alternative-melodic-metal band who does whatever it can to maintain its well-earned spot in quality metal lovers' playlists, CD shelves, and from here on visually as well. 51 minutes and 51 second well spent in front of an otherwise degenerating TV screen.