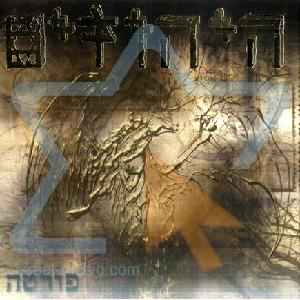 Big guitars, a very dense yet very clear sound, catchy yet not banal melodies, drama and frustration which have nothing to do with teen angst or raging hormones, well put harmonies and spotless production – these are just some of the things Hayehudim's (translates to: "The Jews") fourth full length benefits from and thankfully manages to hide with some of the otherwise eminent shortcomings the band holds. It's kinda like a rotund lady; she may have a bit of a belly, well…she is full, but she knows how to dress so it won't be seen, and is an interesting enough person to want to spend time with.

"Forte" opens with the noisy, dirty and sweaty "Don't Like", which defines that dense yet clear sound I was referring to; the choice to open the album in English is questionable yet ultimately easy to understand – "Forte" is clearly an album produced under international standards, and as one, it is fitting to be opened with English. The unequal dosage of Hebrew (11) vs. English (4) songs is easily understood as well, this band knows where its crowd is and what it likes. The gentle and orchestrated "Somebody Else", the slightly oriental riffage of the excellent "Learning" and the bombastic "What About You", which slowly swings like a sharp and heavy pendulum – all (along with "Don't Like") express the band's wink sent over seas, all express that some lyrics just sound better in a different language, and represent the fact the band doesn't hesitate to try and capture harder grounds. Why, there isn't shortage in grunge-influenced rock bands out there, but as far as music here in Israel goes – there is no disputing "Hayehudim" are the definition of Israeli rock, regardless of recent contenders like "Beit Ha'bubot" (translates to: "The Doll House") and "Synergia".

In comparison to the three previous albums (not counting in the live/acoustic ones for obvious reasons), "Forte" is well highlighted at second place. First place is kept by their 1995 debut "Metziut Nifredet" (translates to: "Separate Reality"). It's hard to top the like of it these days, when everything's been done and re-done, so period defining album such as "Metziut Nifredet" had a certain unattained chaste and great impact. Regardless, songs like אין לך מקום (translates roughly to: "Don't have a place") where band leader Tom Petrover is at his best, the touching עד שזה יעבור ("Until it passes"), the wild and abundant גם כשלא בוכה ("Even when you're not crying") and חולמת ("Dreaming") which closes the album with stifling melancholy, all give up a good fight. What drives the album away from perfection are songs like הנה זה בא ("Here it comes") which is closer to the band's unripe second self-title album ("Hayahudim" 1998), the existential ככה אני (roughly to: "That's how I am") which could have been a part of their 2002 album "Pachad Mavet" ("Death Fear"), and both להיות ("To Be") and חופשי ("Free") who sound kinda forced.

Putting aside rotund ladies, comparisons and language debates, it is well apparent that "Hayehudim" approached the album with loads of experience, and the result is the most anticipated Israeli rock album in the past two years, indulging fans with fifteen new tracks (about 80 minutes) with no fillers. Ok, ok, their music is often just standard mainstream guitar-laden rock – call it Israeli rock if you wish – but the fact it's a popular band doesn’t necessarily mean it's a bad one. Their drive and momentum prove that eventually, you don't have to be a teen to connect to and enjoy their output (live of recorded), you just need to be open to the grays between mainstream music's flat brightness and alternative music's meaningful darkness, even if this shade of gray is rather pale.