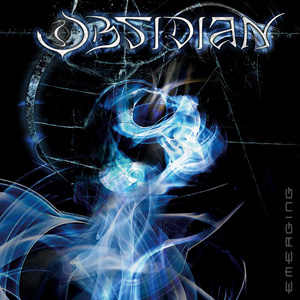 Bound to hook up with your home/car stereo on more than one occasion, this version of "Emerging" is actually a re-issue of an album carrying the same name released in 2006 independently. Obsidian signed to Rusty Cage Records on March, and their prior change of vocalist (swapped Serge Regoor with Robbert Kok, AKA Robbe k, last October) spawned a need to re-issue the album with new vocal tracks, pimped-up artwork, a fresher mix done by Jochem Jacobs (of Textures) & Bouke Visser of Split Second Sound and to wrap thing up – mastering done by Robbe K. himself.

As if the original wasn't good enough a treat, this one really beats your speakers and ears into submission. Textures, quite obviously, are the first who come to mind…these two Dutch bands are like two gorgeous Dutch twin blonds, with a great musical taste on top. Right from opener "Footprints" the likes of Meshuggah, Scarve, Cynic and Gorefest also come to mind, you can't mistake the style here – progressive death metal. Follower "Kobalt" leans more towards Swedish Gothenburg-style death metal while altogether sounding more mechanical and estranged. As for the lyrics throughout the album – they too are very dispatched, very ethereal and paint a blurry, dim, picture; "Dogmatic", one of the highlights here (due to its great lead and superb weight shifts) is a prime example of it.

Compared to the original, the re-issue has sharper blades and thus hits better. The mix is definitely cleaner, cleverer, and more layers come through. Songs like "Vapours" (drastically influenced by Meshuggah, somehow reminiscent of "Strength" out of their "Nothing", a comparison I'll refer to later), the death-metal tinged "Mirrored", the aforementioned "Kobalt" and closing track "Tsujigiri" sure benefit from the oxygen the album was given here. Robbe K. has greatly improved the vocal lines too; it's not that Serge Regoor was bad, it's just Robbe has a more expressive growl, a wider range, and overall a deeper/sicker voice.
There's a definite fresher vibe give by a clearer sound. "Emerging" goes down smoothly, regardless of the complex riffing, odd time signatures, constant scale shifting, abyss-deep growls and relation to extreme metal. The music here is celestial on a whole different level.

It's clear Meshuggah play a lead role in influencing Obsidian, and the names dropped earlier play the supporting roles respectively, but it is also clear the these Amsterdam lads don't work by a formula; the instrumental title track, the atmospheric breaks ("Kobalt", "Vapours" ect.) the combination of occasional clean/acoustic guitar and the incorporation of memorable leads and clean vocal lines with such a technical & inhuman brand of music – all mark Obsidian as an intriguing independent entity.
While very different from godfathers Meshuggah's "Nothing" (2002) and its 2006 re-issue, "Emerging" is clearly a worthy piece. It's probably no coincidence "Nothing"'s ending tone is named 'Obsidian'…perhaps it was a sign of some sort. The technical legacy is safe with the likes of Obsidian, and by the time their next offering surfaces I'm certain they will not only preserve but also be a potent part of it.