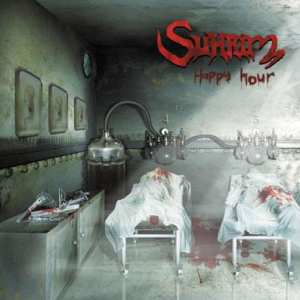 It's quite amazing to me that I haven’t head of this veteran Belgian death metal band before, it seems these guys have been active since 1989, but went through quite a lot of line-up changes before producing their debut album – Unidentified Flying Bodyparts in 2002.

Musically these guys can be described as a brutal death metal band, but they have plenty of technical touches, something which is accentuated by the drum work by the impressive Kevin De Leener, a veteran of many Belgian death bands.

The band's music and song writing is far from original or innovative, but they still manage to create quite a versatile and dynamic death metal album, which oozes professionalism and quality. Another thing these guys have, which too many brutal death bands lack is a sense of humor, evident in the movie samples they use to open up the tracks, specifically in the Ghostbusters II sample that opens up the album.

Though the first track is allright, it's from the second track onwards that things really pick up the pace. Vocalist Johan Antonissen is another veteran, most famously from Leng T'che, as are one of the band's guitarist and bass players, and you can hear that accumulated experience in the band's music.

Songs don’t last very long, they come in – hit you on the head like a shovel, and go to the next one, all have sufficiently interesting riffs, great drumming, deep and impressive vocals, and basically that's all this genre needs. It's not too complex, though definitely technically impressive.

Finished off with a tight sound, this is a fluent death metal album that goes through fast and painlessly, while remaining entertaining. It's not a huge classic either, but I prefer one like this, that works well, over a 100 over ambitious efforts that I have to suffer through most of the time.