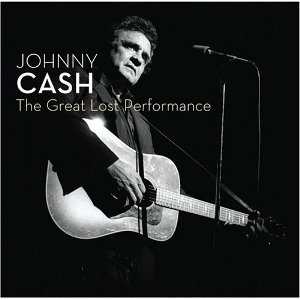 Johnny Cash may have left us with "A hundred highways", the last in the "American recordings" series, as chilling and moving farewell note, but "The great lost performance" is the way each one of us should remember Johnny Cash; Witty, big dramatic and deep voiced, with a good sense of humor and a passion for the music he played for so long.

Even though Cash lived and breathed Country music, it's almost unfair to categorize him only as a great country musician. After all, Cash was the closest there is to a rock star in country music, and is probably more rock n' roll then most rock artists these days. The man in black, with an almost unexplained love for playing behind the prison walls, and a soul that's impossible to cage in words.

"The great lost performance" gives us Johnny live in New Jersey back in 1990, sounding better and sharper then ever. Throughout 18 tracks he plays lots of his classic numbers as well as new tracks. During that time he doesn't miss a chance to talk to the audience, tell jokes and be the great story teller that he is.

The last tune I heard from Johnny Cash's music was the last track from his last album – "I'm free from the chain gang now". This is also the line closing the track and the entire album; Johnny's voice was still the same hypnotizing voice, but weaker. His old days and illness were curved in his breath and vocals. Since the first time I heard that album from beginning to end I was amazed by the symbolic and emotional charge filling that song. Cash, who kept his dark ex-prisoner image, feels free from those shackles that bound him, while in his real life he was spending his last moments alive.

Echoing is that memory as I place "The great lost performance" on my stereo, the clapping and fast guitars fade in, welcoming Johnny's voice with the classic "Ring of fire". If "Free from the chain gang" felt like walking him his final path, this is resurrection. At least for the next 53 minuets.

Companied by a bass, drum, piano and guitar band, he is also joined by Lucy Clark, Helen Carter and Anita Carter Jones as guests. They run through classics such as "Forty shades of green", "Folsom prison", "Hey Porter" and "Ghost riders in the sky" when at least towards the end, his wife, singing companion, and true love June Carter Cash joins him on vocals for the classic tune "Jackson" and "The wreck of old 97'". Cash closes the show with the immortal "I walk the line", what will later on become the title for his biographical movie. That as well as his last album will only be released shortly after he died.

There's no actual need to talk about the quality and resonance on Johnny Cash's music. He has earned his reputation as a musical legend and influential artist long ago. It's how the record companies will use his image I was worried about; There's no shortage in examples of how record companies use their artists long after they're gone for their own benefit regardless to the artists' ideals and whishes. Luckily this isn't the case.

This live album is a beautiful monument and worthy of Johnny Cash's life work. All the classic Cash marks are in here - music, words and spirit. And as much the "Hundred highways" could live you on the edge crying as he pays his goodbyes to the world, "The great lost performance" will make you get up and celebrate life