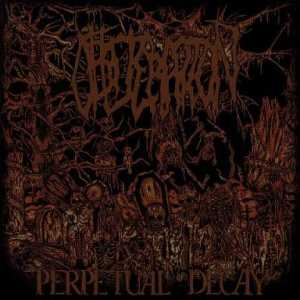 Tyrant Syndicate, the collaboration between The Uk's long-lasting metal label Peaceville's and Norwegian old-school fanatics Darkthrone finally has a new release, this time, a classical death album by Norway's Obliteration.

Before you even start considering listening to this album, ask yourselves if you liked Cannibal Corpse's debut – Eaten Back To Life, or Malevolent Creation's second release- Retribution, if you did like these two, there's a good chance you'll enjoy Obliteration's debut effort, since old-school American death metal is exactly what these guys deal in.

Two of the band's members also play in thrash outfit Nekromantheon, and you can hear that in the music, as was the old-school American death metal, it's very much thrash oriented, in the guitar riffs and the drumming, only here you get a very raw and aggressive vocal attack, with plenty of low-pitched growls and some higher snarls. Another thing is the addition of almost doom-like slower passages, evident in the album's opener, the aggressive Sadistic Nekroaboration.

Almost everything in this release is done right for this genre, the sound is dynamic and not overly polished, yet quite clear, and the guitars have the proper skull-crushing crunch they need, again – without being too crisp and clean.

The second and third tracks show off the band's affinity to old school death metal very clearly, they don’t mess around with too many tempo changes or complex riffing, there's a definite air that such classics of the genre, such as Immolation's Dawn Of Possession or Suffocation's Effigy Of The Forgotten had.

To surmise, it has nothing new or groundbreaking in style of music, the way to judge this is if you, like the guys from Darkthrone, enjoy the charm of old school extreme metal, and if you find yourself missing the good 'ol days of the late 80's and early 90's, when death metal still sounded scary.