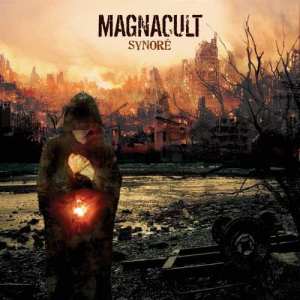 Magnacult's debut release is not easy listening album, far from it. The band's complex and very aggressive tech-metal draws its influences from such greats as Meshuggah and more death metal oriented bands as Darkane. It's all very well technically executed, but the question is, is it any good?

The answer is probably a solid yes, there's no denying the extreme ability these guys have of creating smart, complex and very aggressive tech/groove metal, with plenty of metalcore breakdowns, and countless ode time signatures in the vein of Meshuggah.

I can't really pinpoint a certain track that rang a stronger note for me, they're all sort of playing off one another, each one containing enough riffs to fill in at least four albums by most metalcore or death metal bands. I have to give some further notes to two things that make this album as strong as it is: the sound, courtesy of Textures' Jochem Jacobs, and the incredibly dynamic drumming, which certainly ranks as some of the most relentless and dynamic I've heard in awhile.
The band's vocalist also deserves a mention, for his immensely aggressive approach, and the guitarists, who pull through the entire complex riffing evident here.

Still, if it's soul or melody you're into, you might as well give this one a pass, technically impressive, very aggressive, but very machine-like and cold, not for all tastes indeed.