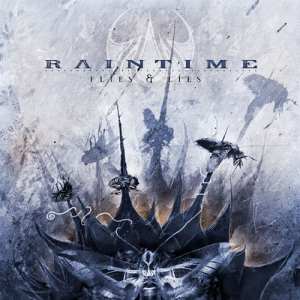 If you liked such melodic death releases such as Scar Symmetry's and Mercenary's latest efforts, you should enjoy this one, the second by Italy's Raintime.

The thing with Raintime is, that while two former two are closer to death metal, with some melodic vocals added to the mix, Raintime's music is closer to prog/power metal, that just has some strong death growls on top, there's some extreme metal aggression, but the basis for the riffs and melodies is more prog/power oriented.

The nice thing is, most of it works. Vocalist Claudio Coassin has a very strong voice, both in death growls and in his melodic approach, and he brings in an air of quality to the proceedings. The band also knows how to play it's stuff, with some extra mention going to the very strong lead guitars in the album.

I really liked most of the songs on this release, not overly complex, very melodic, they have the right mix of all the right elements. When the band goes into slower, more power metal oriented territory, as they do in "Finally Me", it still adds up and sound natural enough, though the more extreme facets are gone.

The band also delivers a surprise in the form of a Michael Jackson cover, they make his "Beat It" into a much better song than it originally was, with Coassin's death growls spicing up parts of the chorus, it's kitsch, but it's nice kitsch to listen too nevertheless.

So, any fans of the bands I mentioned at the top should take heed, this is a worthy addition to the growing roster of very melodic death band, or vice versa – very aggressive prog/power bands...