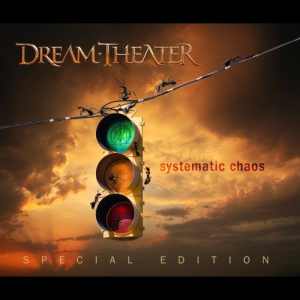 One of Progressive rock most rememberable quotes in the late 60's mentions how rock artists got tired of writing 3 minuets love songs, so they started writing 20 minuets songs about nothing. "Systematic Chaos" is a vivid illustration of that exact sentence.

In a quick overview it's already noticeable that the album has a modern prog metal structure. The opening and closing track are part 1 & 2 of the same title (in the presence of enemies). Most songs are above 9 minutes long while the shortest one is five minutes long. Seductive as those details may sound, the album itself has no appealing at all.

"Systematic Chaos" has every Dream Theater trick in the book. Fast and accurate playing technique, constant changing tempo along with the overblown and over length instrumental parts. And lets not forget the stadium anthem choruses. Maybe still hoping for radio stations to pick up the glove and air "Forsaken".

Since "Images & words" , Dream Theater was the face of prog metal. The way it will sound, how it will look. That album (and I doubt if people can disagree) was the opening shot for prog metal. Throughout the nineties they kept on developing it up to their masterpiece "Scenes from a memory", and some might even include "Six Degrees" as one of their best albums. What's for sure, is that since then, every band who wanted to play prog metal, sounded exactly the way they had, and In bad case scenario like a cheap imitation of it. The thing is, that since "Six Degrees", Dream theater itself sounds like a cheap imitation of what they used to do best.

For those who could tolerate "Train of thought", were to deal with the exhausting octavarium". The new album goes on the same lane. This is the most boring, deprived of content and essence album the band has ever released. If "Train of thought" was to be their heaviest album, and "Octavarium" was to be their biggest homage to classic progressive rock, "Systematic chaos" is just pure irrelevant and pointless. It mostly feels like the band first decided on how long will the track be, and only then decided how to fill it's playing time.

The track "Repentance" is A good example. This is the latest (but not last) of Portnoy's ongoing alcoholic but no anonymous saga. Even though artists like Steven Wilson, Mikael Akerfeldt, Jon Anderson, Daniel Gildenlow, Neal Morse, Steve vai, Joe Satriani and more, gave a helping hand here, this is still one of the most tiring and talent wasting tracks there is. The second part of the song (where all the artist above take part in) is all about regrets and asking for redemption on something they have done throughout their lives. By doing so the band tried to create an emotional track, kind of like what Pain of Salvation did on their album BE with the spine chilling "Vocari dei". Dream Theater's attempt sounds mostly like a blurred one dimensional misunderstood version of that track.

The over catchy choruses in track like "Forsaken", or the melodic shaped roughness in "Dark eternal night" sounds too recycled and to banal. LaBrie sounds tight and in prime, but at the same time sounds distant, emotionless, and lacks charisma.
Dream Theater's high playing technique is always a virtue. And it is always fascinating to hear their plying group dynamics and abilities. That is probably what will keep them as a favorite band for those first step guitarist that still believe that fast is better then slow. Well that is until they realize that David Gilmour's feel on the guitar is worth a lot more then 120 KMS playing.

"Systematic Chaos" will probably do for Dream Theater's hardcore fans. On the other hand, nothing can disappoint those guys. But i'm guessing that any true music fanatic has already moved on searching for some new interesting and challenging music. Now we can just wait for Dream Theater to do the same.