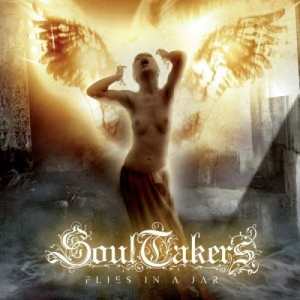 At first glance, Soul Takers' second album – Flies In A Jar might seem like your average Italian power metal album, high soaring vocals, fast double bass drumming, and plenty of keyboards. One cannot be further from the truth, the album is actually a rather slow, quite tragic-sounding album that contains several strong tracks of symphonic sounding prog metal, it's adult, interesting, and almost devoid of extra weight.

Opening up the album is - Heaven's Pillars, the music is closer to symphonic rock/prog with some tragic sounding melodies. The band's two main strengths are immediately apparent – the strong vocals by Dino Brentali, who has a real heartfelt voice that works well for the band, and the very prominent piano work by Federica Badalini, who's actually the main focal point in the band's music.

The sound, by the always dependable Luigi Stefanini, is just what the band needs, it's dynamic and warm, not as large or shiny as most prog/power bands use these days, and I think that's another positive point for a band whose music is so different.

The album moves almost completely rather slowly, the songs convey more feeling and atmosphere than they do technical playing abilities or grandiose melodies, and that's something that's quite unique and separates the band from a heap of other similar artists. Some tracks, such as "The Chasm", make prefect use of the band's talents in creating strong, very moving melodies.

Though sometimes defined as prog metal, it's difficult for me to view the band as such, their songs are not overly complicated, they do not contain any extremely impressive playing, but they have it where it counts – they write, interesting, heartfelt music, and they perform it well.