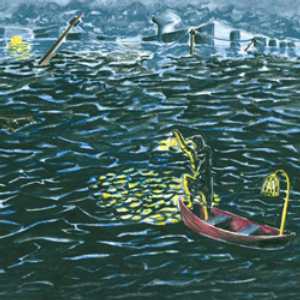 Explosions In The Sky - All Of A Sudden I Miss Everyone - [Temporary Residence LTD.]

A hard day's work, a rough week, a tough month, a major exam, ending a long relationship, when all you can do is sniff the scent the rain has left and restrain your own waterworks, just contemplating on what you've done, how it shapes who you are and where to go from here on – that's when you find yourself with "All Of A Sudden I Miss Everyone".

Distortion drones, repetitive rapid high-pitched strums in different speeds and tones, dream-like melodies, gushing cymbals, and three guitars throwing lines around much like Freud's Id, Ego and Super ego – all accompany you on a personal journey thorough the enigmatic mazes of your own human mind, and in just one day, cramped into a little under 8 minutes of "The Birth and Death of the Day".
As it unfolds, you're drawn inwards, and don't even notice continuing to "Welcome, Ghosts", the second track here and what for some was the first impression of what "All Of A Sudden I Miss Everyone" would be about, raising great anticipation and ultimately fulfilling them and working as well in the context of the entire album as alone.

EITS have a way of getting you in, once concentrated, so deep you'd forget what track you're on, what time it is, what day it is and where you are but most definitely remember the main theme, as shown in the over 13th minutes long centerpiece epic "It's Natural To Be Afraid".
Follower "What Do You Go Home To?" mellows its way in, softly rolling strings and keyboards almost at random, thieving right where your faucets are with backwards piano steps and turning them up fully, just waiting for you to break. The actual breaking doesn't take long to follow - "Catastrophe and the Cure" is the zenith, the point where all the elements, the building blocks of what you define as you, breakdown and re-assemble, knowing you have changed.
Morning dew and first rays of sunshine penetrate the shutters, be it the ones on windows or your very eyes - "So Long, Lonesome" has a way of opening them and making you feel so vigorous.

It's been about 4 years since Explosions in the sky's last full-length ("The Earth Is Not a Cold Dead Place"), and with this, their 4th album (secluding 2005's conceptual EP "The Rescue"), it seems that most of all - they've grown. Much like the album itself does to you – they've done themselves. There isn't a single note here to cut down nor add, this is a piece of art to be interpreted in a different way by each and every individual; some individuals, by the way, such as Adem Ilhan (Adem), Kieran Hebden (Four Tet), Matthew Cooper (Eluvium) and the ones of Jesu, pAper chAse and Mountains have already made their interpretations to "All Of A Sudden I Miss Everyone", each took one track and gave it its own personality. The result is quite far from how Explosions In The Sky and producer John Congleton did it; instead of having a correlating introverted piece having an eccentric extroverted one. Either way, this is not background music, but rather the actual action, thoughts and feelings the night after a bad day, from the moment you got home to the moment you woke up with a hangover.