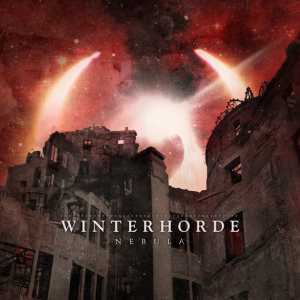 Israel's black metal suite Winterhorde may seems rough, tough and uncompromising – almost fixated on the genre, style and look of black metal - but on this, their debut album, with the Greek label Burning Star Records, their display is rather varied. Winterhorde choose to stay true to hell-grasping roots but also include apocalyptic, almost space-like ambiance through some proper use of keyboards, get reinforced with close-to-neo-classical composing (and not just in fillers between the songs), and stray from the darkness of black metal into the "light" of brutal death and blackened thrash via some of the teeth grinding riffing found on "Nebula".

Opening rather predictably with an ambient intro, "Nebula: The ultimate redemption (Prologue)", was actually a smart choice since the blasting drum rolls of follower (and one of the other 7 actual songs here) "The Fall Of Angelic Dominion" certainly won't keep the listeners indifferent, and neither will the demonic "The Earth Is An Altar" – these are not the kind of songs you'd like to hear hungover.

Winterhorde are no amateurs when it comes to playing together as a band and as far as composing for black metal goes, "Nebula" is gushing with experience in the dark arts; highlights include the glorious epic "Hate Parade", an extreme number being well served by the orchestration (that's so actively entwined and isn't just there as a carpet), "An Ode To Man", which begins with some sick noise and sicker disharmonic strings building the tension until the wild burst, and even weaving in some clean vocals, goth-like choirs and an acoustic part, adding to the band's already preceded diversity here.

Hailing from Israel's northern region, Winterhorde sure sound like they're at least from further up north, perhaps from a country such as Norway or Sweden, and are yet another band proving that it doesn't matter where you're from – it's who you are and what you do, and they sure do it good. "Nebula", regardless of its rather flat sound quality, sounds majestic; As if the lord of darkness himself came to take over the earth, and chose Winterhorde as the marching band to lead his army.
Putting fairytales and myths aside, it is most notable that a lot of hard work was put into the album, and if they'll be as persistent as they were up until now maybe the next album will bring home the un-Holy Grail.