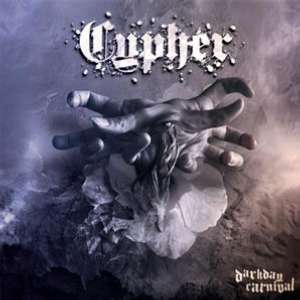 Holland's Cypher are yet another new export from the European metal scene that deal with what is mostly recognized as an American metallic genre - Neo-Thrash. Musically they bring to mind mainly The Haunted, with some melo-death in the vein of current In Flames. I guess this defines them as a metalcore band is some ways, but they're much heavier than any current metalcore band I know. The only recognizable connection is the vocals, altering from growled death grunts to higher, almost hardcore-like, screams.

Anyhow, some things are easily evident; the band members are pro's, they can play and the music is very well crafted, as a unit this is as tight as it gets. The sound is clear and crispy, also does wonders for the band, as does the overall design of the album - it shows care and consideration. Still, this is not an easy album to swallow.

As I said, this is extremely fast and extremely aggressive, and the band does not mellow down its compositions with catchy or easy riffs, this is complex and quite hard to understand immediately, most tracks contain various rhythm changes and unorthodox guitar riffs, and the aggressive vocals make this an even harder pill to swallow, so I would recommend the album mainly for hardcore The Haunted fans, and those who seek a heavy dose of aggression in their metal.

Standout tracks, from my point of view, are those that bring in something extra into the guitar riffs, such as the somewhat oriental leanings of "Nailed To Redemption", or the melodic and very well done "Make Thick My Blood". The title track is another colorful addition, divided into two parts, with the first one being a dark acoustic number.

Certainly a high quality album, I still wouldn’t recommend it to very melodic oriented metallers out there, this is one heavy MF that will only go down well with extreme thrill seekers out there.