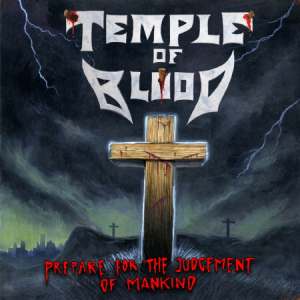 Temple Of Blood - Prepare For The Judgment Of Mankind - [Self-released]

Man, why don’t they make speed metal any more? I know there's a resurgence in the thrash scene, but most of these bands can play like hell, but tend to overcomplicated things and use screamed or growled vocals. What I miss is classic speed, with melodic riffs, melodic lead guitar, and strong melodic vocals… praise the lord! Christian speed band Temple Of Blood have delivered exactly that, one of the best speed/thrash album I've heard since the early 90's.

"Destruction Of The Twin Cities" starts off the album with a bang, fast, technically proficient, yet melodic and quite catchy, the best thing here is the vocals, no more screamed barks of a great guitarist that can't sing, these are real vocals, vocalist/guitarist Jim Mullins has a great speed metal voice, strong mid-range with some upper range screams preformed admirably as well.

Anyone with a hankering for some serious guitar leads should listen to the lead section on track three, "Return To Eden", a more traditional metal cut with this great twin guitar lead section, the end also features some nifty bass work. "Spiritual Warfare" starts off with a somewhat oriental harmony lead before turning into one of the album's best thrash moments. Again, I can't help but be impressed by the playing ability by these guys, Iron Maiden-like bass lines, energetic double bass drumming, and great guitar work by the two guitarists.

There are some different aspects of the band as well, in the clean guitar intro to "The Ultimate Sacrifice" playing a bit like Testament's "The Ballad" before crushing down with some of the best guitar riffs here. Another good thing about the band is, though they are clearly a Christian band with religiously oriented lyrics, they don’t feel too preachy as to annoy any non-Christians such as myself, this feels more like a lyrical concept than a band on a pulpit.

Anyone with any fondness to classic thrash and speed should try and get this one, it's just sad they don’t make more of these albums anymore.