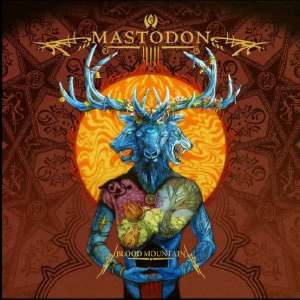 What is there to say about an album which received grace in all forms and has been praised by anyone who's heard it so far? Even saying Mastodon stayed true to their musical and artistic truth though they're backed by Warner Bros. has become bland, I mean, did anyone really think they'll go commercial and lose their uniqueness? "Leviathan" was a milestone or the way to the peak, so it was obvious "Blood Mountain" would be the next step up; the real question here is how a good an album it is.

12 tracks with Brann Dailor's drumwork are enough a reason to buy the album, but for those of you who want more or just don't know Dailor's exceptional display, just take a look at the guest appearances; Scott Kelly (of Neurosis, who already gave his voice on "Leviathan" in the Neurosis-esque "Aqua Dementia") on the jaw-dropping "Crystal Skull", both Cedric Bixler-Zavala (vocals on the loopy "Siberian Divine") and Isaiah "Ikey" Owens, (who does keyboards on "Pendulous Skin" – a song where one might mistake the opening clean guitar for being by Opeth, up until the effects slide in and turn the song into some free-form-fusion-folk-stoner closer) of The Mars Volta, and Josh Homme (QOTSA, Eagles of Death Metal, ex-Kyuss) on "Colony of Birchmen" as well as giving his version of a fan letter after the album's over.

Other mentionable tracks, other than the strong-kick-in-your-face opener "The Wolf Is Loose" and equally strong follower "Crystal Skull", are "Circle of Cysquatch" with its sharp guitars and its follower "Bladecatcher" with its Mr. Bungle (minus the whole gypsy folk business) influenced demented-Patton-jazz like build. "Hand Of Stone" and "Sleeping Giant" take us back to the days of "Leviathan", where Mastodon sounded as its name applies, as a massive primal beast journeying through the icy wilderness. You wouldn't find a lesser track here, for they all work well as separates but best as a continuous piece.

"Blood Mountain" is as solid a masterpiece as "Leviathan" regardless of the whole lyrical concept versus actual "Moby Dick" concept story issue, it easily joins the "Best Metal of '06" list, alongside veteran titans such as Slayer, Ministry and Iron Maiden.

There are many good albums out there, but one must remember there are also classic albums; what separates a good album from a classic? classics withstand the test of time, meaning they're relevant years after their release date…so only time will tell if "Blood Mountain" is such an album, that would be relevant five, ten or twenty years from now. In the meanwhile, just enjoy it as it is - as a worthy and meaty release.