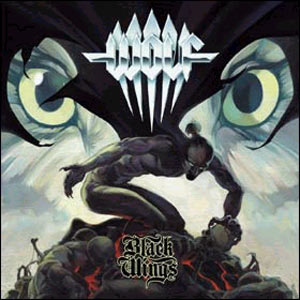 In the last few years the Heavy Metal has increased together with the European Power Metal.
While the Heavy Metal is usually influenced from bands like Iron Maiden and Judas Priest, today's power metal is usually influenced from bands like Helloween.
Today most of the melodic metal bands belong to the power metal genre and only few belong to the heavy metal genre.
Wolf belongs to the heavy metal, but yet sounds authentic.
When I played the "Black Wings" album I had flashbacks of the first Iron Maiden albums in the time that the music was melodic, but also very rough.
Something between the old school metal and today's rough sound.
You can flow with the songs that have been produced in a very good way.
With no doubt I can say that Wolf has the technical and musical ability.
The album has 9 songs, including a cover version to "A Dangerous Meeting" originally by Merciful Fate, which sounds very good.
I really enjoyed listening to this album, especially to first 3 songs that was a good start to this album and gave me a good “drive” to keep listening to this album till its ending.