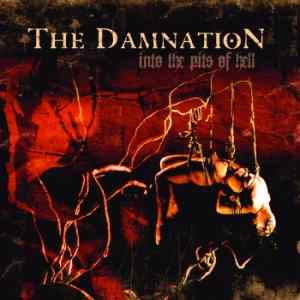 The Damnation - Into The Pits Of Hell - [Self-released]

There's nothing nu-school about The Damnation's death-thrash metal. The German band's music is a blind march into battle with no prisoners taken and quarter given, it works well most of the time, but in certain points can tire the senses.

Formed in 1996, there's no denying the band's playing ability and sound professionalism, and the excellent opener "Step Aside" is a great example just how good they can sound. It's in the more simplistic moments, such as some in "Torn To Pieces" that boredom can set in.
Thankfully they follow that with one of the album's most crashing pieces – "Dawn Of The Dead" – an oldschool, American sounding death metal number with several great riffs and an awe-inspiring drumming display. Vocalist Michal Meyer's voice is a strong, deep death growl that is another asset for the band. The track also features a great melodic short lead section.

The band's goes into another killing frenzy with the more sophisticated "Past", the rhythm and riff changes are a nice addition. The parts where they lost me are in the more simplistic cuts, such as "Into The Pits Of Hell" where there's no real hooks.

This isn’t overly original, but I must tip my hat for these guys for sticking to their guns and creating strong oldschool death metal while most current death bands go for the usual melodic approach, they certainly grasp that true 90's feel with their music, and the fact this release has a definite air of quality about it only helps.