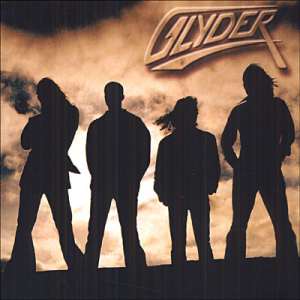 South Ireland's Glyder admit they are heavily influenced by fellow countrymen Thin Lizzy, and that can be easily heard in their music. The good thing is they don’t just mimic Lizzy, they have their own identity, their own musical approach, and they create one very enjoyable debut album here. Extra kudos go to veteran producer Chris Tsangarides for giving the album just the right sound, it's very rare to hear a debut album so well produced, sounding so prefect for the band.

While "Colour of Money" is a nice enough rocker of an opening track, it is on the second track – "PUP" that you can hear just how good these lads are, great Thin Lizzy guitar melodies, string melodic vocals, the right feeling is there. The lead is absolutely spot-on as well, heavy rock with all the proper touches. This song also reminded me just how influenced from Lizzy were Iron Maiden when they started out, this sounds a lot like their early material, debut and "Killers" area. "She's Got It" is another great rocker, the vocal melodies work great for the track, and the blues hooks sit in well too.

The heavier moments, such as the riff in "Saving Face" bring another aspect, it reminded me of Lizzy's "Thunder And Lightning", though heavier and more modern sounding in parts. There's a good emphasis on the bass work here, "One For The Lost" sounds a bit more like late 70's prog rock, the vocals are done with feel and a good sense of what is right for the song, something that a lot of bands tend to forget.

One of my favorites here is "Die Or Dance" another Iron Maiden-like melodic piece, the guitarists certainly top themselves here, some truly great leads and harmony lines, and good 70's style keyboard work.

I can't really call this retro-rock, this isn’t The Darkness, this is current hardrock influenced by the true masters of the genre, and these guys have enough talent to make it work.