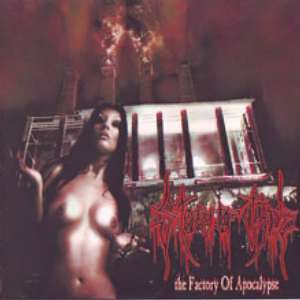 Story Of Jade - The Factory Of Apocalypse - [Self-released]

Italy's Story of Jade may look like a black metal band, corpse-paint and all, but their music is a variation of old school thrash combined with some melodic death riffing. It’s a self released effort, but the sound isn’t too bad and they are quite capable players.

The title track has some strong riffing, solid verses, and a great bridge section, the only thing that I didn’t care for was the almost punk-like chorus, but extra points go to the great melodic lead in the middle, there's no denying the ability of the of the band's guitarists. The vocals will probably bring to mind some classic German thrash, a-la Destruction, with some Italian Necrodeath thrown in.

"S.o.S" again has some great verses with a chorus that does not work as well, the female vocals, though quite minimal, are unneeded. The band needs to put a seal on their style, if it's thrash than the female vocals and punk elements must go. Still, they can play, again there's some great guitar work that adds a lot to the mix. Same goes for "My Vein", again, well played thrash with great lead work. By the way, the vocalist belts out an occasional melodic voice that far exceeds his death growls, I think he should stick to that and thrash screaming.

So, to surmise, a lot of talent with these guys, some good tunes, but they need to place themselves in one genre instead of being all over the place, they have a death metal logo, black metal corpse paint, and Goth metal female vocals - I would trade it all for some decent thrash, because that's where their talent lies.