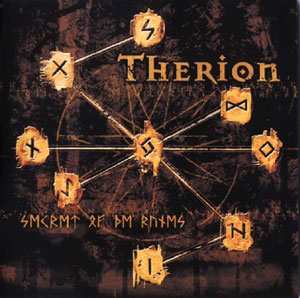 Again Christofer Johnsson brings us a great new album.
Therion has delivered the metal world something new when they have released their 5th album - "Theli" on 1996, it was an amazing mixture between orchestra - opera and metal, some people define it symphonic metal.
Since the "Vovin" album from 1998, Therion keeps doing more or less the same kind of music and every time they surprise me with their quality music, amazing opera parts mixed with guitars.
"Secret of the Runes" has the same Therion style but this time it has something new, it also have a very good production .
The album is opened with "Ginnungagap (Prologue)" there is some part in this song that remind me the 70's album "war of the worlds" by Jeff Wayne.
This is a good way to start this journey of metal and opera.