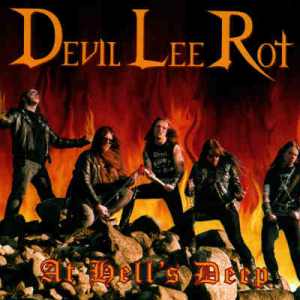 Old school metal, that's the key word in this, the new release by this veteran metal band led by the enigmatic David Lee Rot.
Unlike his namesake, David takes his queue from much heavier influences than the to -be-expected Van Halen, more evident in his music are some Venom and Merciful Fate touches, with the vocals sounding like a mix of oldschool black metal and early thrash efforts from German thrash bands.

The sound on the album is very good, clear and meaty, and from the opening melodic riffs of “The Battle”, it’s clear the band also uses their instruments in a professional and accurate manner, to define their music is a bit of a far stretch, but for most part I'd say its thrash with melodic elements.

A lot of NWOBHM's going on in the proceedings, evident in tracks such as “Danger In The Dark”, or the opener “At hell's Deep”, Rot himself comes through as a satanic version of Udo, tearing ears apart with a truly high pitched screaming voiced, its this combination of melodic thrash and aggressive vocals that gives this band some of its evident strength, by the way, I found his voice strangely reminiscent at times to Golum's…

As I said when I started, this is oldschool for extremists, but those with panache for 80's metal will certainly enjoy this release immensely.