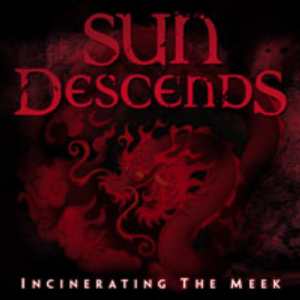 Sun Descends' first full length does something which is almost unheard of, they create fast and brutal thrash metal without using any modern influences and riffs, and without reverting to the punk and hardcore basics that some veteran American bands tend to explore in their current releases. Sun Descends just thrash, violently and mercilessly.

The band’s main claim to fame is the presence of one Mem Von Stein, the original vocalist/bassist for German thrash legends Exumer, his delivery is a straight forward thrash one, no melodies, just high pitched half-screams a-la DRI and classic Exodus, he is also one of the band's strongest points.

The album wastes no time in licking your head in, “Angry Male Gods” is fast and aggressive, excellent sound lets through the band's strong points, there's a definite Slayer riff in the middle, something that's Stein's ex-band, Exumer were also known for using, there's a good lead break in there as well, there's no arguing the band's mastery of their instruments. “Day Rat” uses the tested formula of shouted backing vocals, a mainstay of oldschool thrash, it might sound dated, but it certainly works in this album.

“Intercepting Daggers” is the band's first video off this album; it’s a very good example of the band's ferocity and unflinching aggression. Track six, “Fallen Saint”, is a re-working of an Exumer classic from their first album – Possessed By Fire, it takes the old school elements even further.

As I said, there's nothing subtle about Sun Descends' music, they thrash fast and brutal, but this will satisfy every oldschool thrasher that I know of, including myself.