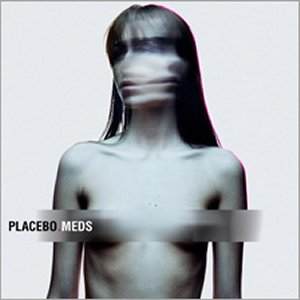 Placebo release their fifth studio album, taking us into the world of the fine alternative rock act, sounding as the half popular half rejected kid in the schoolyard.

Placebo was never a "fifteen minutes of fame" band, one of those who gets a big break and hits it off with one single and then vanishes in the same velocity in which they hit it off.
Throughout the nineties Placebo has made their way through the world of rock, creating a large fan base and sometimes even a commercial success, and so they keep on growing from album to album.

After a well based foundation, they release their fifth album, "meds", in which we get a look at a more mature and more secure band, in its own act and materials.
The producer for this album, Dimitri Tikovoi , is the one who suggested and wanted the band to take a step back from their more electronic approach, and encourage them to strip their music down a bit; back to the basic bass-drums-guitar, giving the album more of a live feel than just showing us how well they can use the studio; in my opinion, it is one of the crucial and better ideas for this album.

The album opens up with "meds" (featuring the Kills’ Alison Mosshart), a rock song in its purest form, approachable, ear catching and yet filled with emotions and hurt, and feelings of loss of control, and it is only empowered by Alison’s vocals, creating a contrast to Brian’s vocals with a softer implying voice. The song comes to an end with a very much Sonic Youth influenced solo.

In a way, one of the things that trademarks the band in the lyrics section, is the "it's not you, it's me" feeling, as if the character speaking is always uncomfortable in its own skin, always feeling not good enough, or simply lacking of human relation qualities (in songs like "drag" in which he is always not good enough and he drags behind the rest), this is a feeling I believe lots of us can relate to, in different aspects of life, and when it is presented with a vocal so secure in its fragileness, it is hard not to fall into its magic.

Other songs which stand out for me, are "Space monkey", which is dark and haunted with a slow tempo, feels emotionally restrained and builds up to a chorus that releases those dark emotions.
"Follow the cops back home" and "Pierrot the clown" are the two must have ballads, broken relationships and intimate atmosphere that will be a great soundtrack for any slow drama related moment; "Follow the cops back home" is my favorite from the two.

"Broken promise" is a song I personally had high expectations from, it features Michael Stipe from REM, who has a high range of emotion in his vocals, and always knows how to hit the spot, and this one feels a bit misplaced, and I would say not used to its full potential.

For the MTV hits seekers out there, you should check out "Infra red" and "Post blue”, a little more "Every me every you" and "Special needs" oriented, great tunes as well.

Placebo is a band that you can hear their improvement in every new album that comes out, but I don't think they have reached their peak yet. They defiantly stand in a good place, with a great album, and great materials.