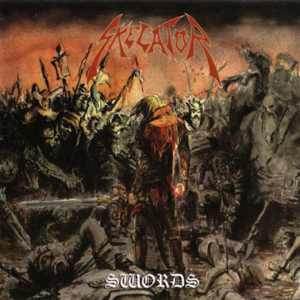 It doesn’t get more old-school than this.
This American four-piece has managed to take oldschool heavy metal to its most logical extreme with this, their first EP, which features melodic guitar lines, simple and aggressive drum beats, a rolling bass, and the high pitched vocals that are the epitome of the 80's style of this genre, reminiscent of what Rob Halford would have sounded like if someone would kick him in the family jewels. It can be viewed in both good and bad terms.

Bad – anyone who likes a good sound, clean playing, anything remotely modern about his metal – should go somewhere else.
Good – anyone who thrives on old 80's metal vinyls – this is the crème de la crème of old escapist heavy metal, coming off as raw as Manowar's Battle Hymns (maybe even rawer…), an oldschool metalhead will wallow in this like a pig in hot and funky mud.

The EP starts with a short movie sample, and then blasts off into “Death To The False”, this absolutely shrieks oldschool, the playing is pretty good, bass has a prominent place in the mix, but to anyone who'll want a proper sound – there's none to be found, this sounds as primitive as a an old trade cassette you got back in the early 90's from a death metal band hailing from Peru.

Second track has some Iron Maiden harmony lines thrown in, again, Jason Conde's voice is as metal as it gets, high pitched double tracked banshee wails, again, the playing is all over the place, but that's what the 80's were like. Track three is a short speech leading to “Heavy Metal Sacrifice”, the fourth track.

Some remarks, though this is a definite 80's throwback, I still would like the band to get proper sound, this may be a self produced/peanut budget/do-it-yourself thing, but they have enough talent to shine through a much clearer sound, still, such were the 80's…