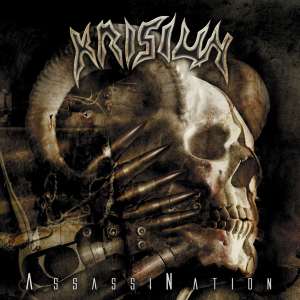 Drilling death metal kings from Brazil Krisiun return with a long awaited full-length; after 2004’s “Bloodshed” got the fans’ and presses interest back came the time to satisfy those slaughter loving ears with “AssasiNation”.

Krisiun were formed somewhere in the 90’s by brothers Moyses and Max Kolesne and were soon completed by bassist/vocalist Alex Camargo (some rumors say he is another brother in the Kolesne family and uses his mother’s maiden name) perhaps with a very specific goal of making death metal in the most Floridian way possible out of Florida’s border.

“Bloodcraft” opens the album in an uncompromising machinegun-like manner and certainly sets the Deicide/Morbid Angel/Slayer-influenced-tone without hesitation.
Krisiun aren’t very innovative, in fact they aren’t innovative at all, yet still have a sort of raw meat freshness throughout the album; be it duo to the clear upfront sound or the nonstop charge on your ears with such a demanding tone; “Natural Genocide” and “Refusal” are good examples of this, in both they band manages to be technical and nevertheless interesting.

The most notable thing about this album is the insanely fast drumwork of Max Kolense, which is pretty much in the same scale of Cryptopsy and Nile and the overall tones are pretty much as vicious as those two savage beasts.
“H.O.G (House of god)” and “Father’s Perversion” blast their way though, led by the very drumwork mentioned above, even having some blastbeats and grinds occasionally to spice it up ever further.

“Suicidal Savagery” offers rabid riffing, adding to the overall excellent guitarwork throughout the album, and about half way through gets a sudden boost up to hyperspeed, this can easily considered one of the best songs in this album; its follower “Doomed” is an interlude, probably there to able the not-so-innocent listeners to catch their breath in order to be ready for the amazing “United in Deception” – the highlight of this album – which marches in dramatically and soon starts thrashing its way, and even has some melody; it’s orgasmic, in some gory way.
Another stop comes in the form of the tribal “Summon”, separating between the ass-kicking “Decimated” (which has more bass presence) and the powerful finish in the form of a cover to Motörhead’s “Sweet Revenge”.
Brutally Brilliant, by all means.