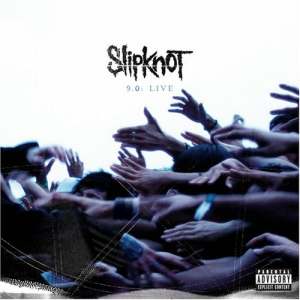 A live album is something that really needs to capture the live energy of a band, and to have a "special something" if it is to be worth its creation.
"9.0: Live" starts off good enough, a voice on the PA starts by saying that the "band wont be able to perform tonight", to the shouted dismay of the disappointed audience, and then "The Blister Exits" blasts through, it doesn’t get any better.

The production work by Colin Richardson is phenomenal, and through the opener it seems this album is one of these rare beasts, good live albums. But then comes "(Sic)", and things fall apart.

Slipknot made only one good album in their career, I know that will piss off the millions who bought and loved their first two albums, but since a review is a subjective thing, and that is my subjective view, then that's that.
The first two albums had respectable enough songs, some fine technical ability by the band members, but it all sounded immature, contrived, it lacked any real appeal and I was bored with them very quickly, that all changed with their third album.

Having Rick Rubin on board have the band something they definitely needed, Direction, and they used that to create what is one of the best metal albums ever created, but that leads me to the problem with this, a two CD live album, they only have enough good material for one CD.

Some of the early material sounds all right in the live set, and the sound here is actually better than the one they had in the first two albums, but that, and the fantastic material from their third, just cant save this album, its too long, the old stuff is mediocre, and it just doesn’t cut it.