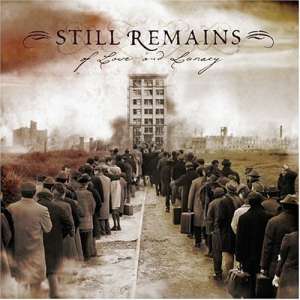 Still Remains hail from Grand Rapids, Michigan. You could say she's in the shadow of the great rock city in the area, known also as the Motor City, Detroit, but saying that would be offensive to a band that shows here she's capable of maintaining herself without any outside help.
The band issued its third release in 2005 and in order to promote it they will appear in the Kerrang Festival which celebrates in 2006 its 25th edition.
Still Remains will perform alongside aiden and Hawthorne Heights.

The band is comprised of six members – TJ Miller is the vocalist, Mike Church the guitarist who helps TJ with the vocals, Jordan Whelan is another guitarist, Evan Willey is on bass, Zach Roth is on keyboards and the drummer is known as Bone.
Of Love And Lunacy, the first LP by Still Remains after two EPs, shows on its first songs TJ's angry voice and Mike's reply with the clean vocals; the drumming is very professional and the riffs are melodic and pleasant. You can even feel the bass in the background setting up the atmosphere.
The band is known to be playing crunching guitars and headbanging drums, but that doesn't interfere with the band's will to send a positive message of hope here lyrically. It could come as a surprise because normally this type of a name to an album implies Goth Metal, where hope turns into an illusion. Still, you can find a bit of Goth here when you hear the keyboards and the bass combine into an atmospheric-setter in the back.
Musically speaking, they didn't invent the wheel, typical Metalcore with plenty of comparisons to Killswitch Engage, but they leap forward somehow from cheap imitation to a cool band, and maybe it's that Goth-inspired keyboards in the background that helps them with that.

The song "Cherished" stands out first, although it has the aggressiveness of the Metalcore and the speed of previous songs, it has a part that slows down, turns the vocals to clean vocals and all of a sudden it turns out to be a completely different song with the slow riffs and standout keyboards.
A nice and quiet passage follows, "With What You Have" is its name, and it is played out with a piano.
"Kelsey" is up next and with it the noise returns, when "Kelsey" is about to end you can hear riffs and vocals reminiscent of Black Metal, which is certainly an unexpected surprise.
An example as to how important the keyboards are as atmosphere-setters in this album can be found very clearly on the next track, "Recovery"- Here we have a pleasant melody alongside some vicious Metalcore tunes and attributes, and there's even a segment where you can hear only the intoxicating clean vocals of TJ and Mike,
A bit later and towards the end the pace slows down, the riffs become heavier and TJ's voice becomes deeper until you really feel the song is taken from a Black Metal album.
The next song, "I can Revive Him With My Own Hands", returns to the same principle of the first songs on the album, Metalcore with a few brakes for melodic riffs and clean vocals.
"Stare And Wonder" that follows is a great song with powerful lyrics, and it is accompanied by changes of rhythm and changes in the style of singing (angry voice, clean vocals that soar or almost whisper, a combination of angry and clean vocals at the same time or a reply in clean vocals to the challenge of the angry vocals) - The surprise on this track is, of course, the piano that ends the song.
The last song, "Blossom The Witch", goes back to the Gothic melody supplied by the keyboards combined with fast riffs, an angry voice that goes low enough to remind us of a Black Metal growl and some killer drum work that blend in perfectly with the music.