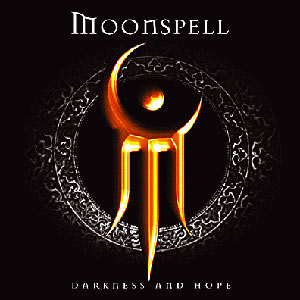 After Moonspell's last album "The Butterfly Effect" from 1999 and a change of style, Moonspell have return to their roots and released the album"Darkness and Hope" which brings us back to the direction of the first 2 albums.
This time Moonspell have more experience and they brought us a great album combined with new elements and the old gothic elements.
The singing of Fernando Riberio is the same gothic singing we heard on the last 2 albums, but it sound much better and sometimes he return to the old doom metal singing style as we heard on the albums "Wolfheart" & "Irreligious" from the mid 90's.
The album has a very good production.
I think that if you compare the music style in the album to the other Moonspell album there is difference, the guitar wah-wah effect sounds almost in each song and makes this album sounds more American - some mixture between The Cult guitar sound on their album "Sonic Temple" and Metallica guitar sound on the album "Metallica" (the black album) especially on songs like: "How we became fire" & "rapaces", thought the keyboards and the singing of Fernando makes this album sound more dark.
My favorite songs in this album are: "Than the serpents in my hands", very good bass work, the keyboards brings some darkness, 2 different singing style and good guitar parts. The song "firewalking", which brings us the old Moonspell sound with some new sounds & the song "Noctuna", which I find to be the most interesting song in the album.
The CD contains 2 CD-ROM video bonus tracks that one of them is uncensored version the "butterfly fx" video.