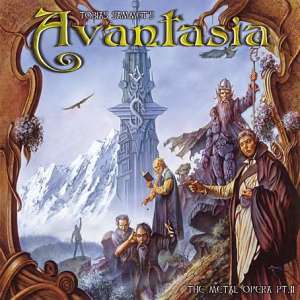 The sad fact is that heavy metal has gone mainstream. You can notice it when you see a sweet little boy in a Walt Disney film says that he likes Pantera or when Paradise Lost suddenly starts to play funk metal. So naturally when A-F-M found out that their N-Sync of the metal world (yes, you guessed it - Ed-Guy) project hit the jackpot they wanted to double their prize and audience (especially the 13-16 years old), and thus Avantasia was created. Tobias Sammat (Ed-Guys singer) a very young and talented man was presented with the opportunity to make his dream of a metal opera come true. As expected from the theme the line up for Avantasia is pretty grandiose and is constructed by the metal world dream team of performers: Mr. Ernie, Kai Hansen (Gamma Ray), Andre Matos (Angra) David DeFeis (Virgin Steele), Oliver Hartmann (At Vance), Sharon Den Adel (Within Temptation), Ralf Zdiarstek, Timo Tolkki (Stratovarius), Bob Catley (Magnum) and Eric singer (kiss),Markus GroBkopf, Henjo Richter, Alex Holzwarth.
The line-up is pretty much the same as the first Avantasia album and the story is about the same: an epic fairy tale on medieval background with fictional and historical characters.
The album is very well produced and is a marksmanship of professionalism and market research. The vocals, of course, are excellent with Sammat on the main role and the other guest singers doing the rest of the roles. A very bombastic and expensive production that should pay off as the 2nd album should sell well as the 1st.
To sum it up I'd say that to see Avantasia live should be one hell of show to take your family to. Fun for everyone (you get the idea…)