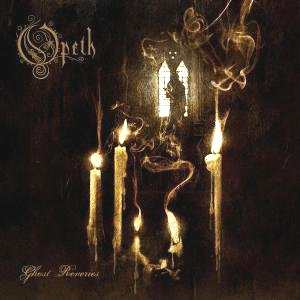 The first time I heard an Opeth album, I knew what perfection is - that album was Deliverance (back in 2002) and it was the same deal with each and every one of their other albums – you can guess it's the same story with “Ghost Reveries”.

The album starts with “Ghost of perdition”, a strong opener in both lyrics and sound; Mikael Åkerfeldt’s growls are so deep and yet so precise, plus his clean vocals just seem to improve from album to album, where in this one he's at his peak.
The addition of keyboardist Per Wiberg (Spiritual Beggars) as a permanent band member, as apposed to a tour member, fills the gaps with either mellow atmospheric keyboards or a fat vintage sound significantly elevating the dark heavy feel (this is well felt in “The Baying of the hounds”).
As far as guitar work, Åkerfeldt and Lindgren know sure how to build tension; with repetitive strumming, chaotic distorted riffs or acoustic/clean guitar, that sounds like it came out the 70’s (like the somewhat oriental “Atonement” or “Hours of wealth” and “Isolation years” which have Deep Purple hovering over them) they prove their craftsmanship.
Martin Lopez is brilliant; managing to do be heavy, interesting and unique whenever needed, contributing his talent to make odd-time signatures sound so natural (“Beneath the mire” and “Reverie/Harlequin forest” illustrate that well), so it’s no wonder he shares the title of my favorite drummer with Katatonia’s Daniel Liljekvist.
Completing the album is bass player Martin Mendez, which sets the tone with his rather unorthodox jazz bass guitar, pushing Opeth to a higher level, also having both oriental influences and the same vintage 70’s sound earlier referred to.

I have to note out “The Grand Conjuration” for it is different from everything they’ve done so far; it feels like it’s the album’s peak, having a sort of Mike Patton push to it and a menacing, dark presence involved in it.

Opeth have definitely picked up a few things from Steven Wilson, which worked with them on “Blackwater park”, “Deliverance” and “Damnation” even though he wasn’t actually involved in “Ghost Reveries”. They picked up precision and richness along with tools that help build the atmosphere such as varied effects, samples, synths and creative editing (like the backwards riff in “Beneath the mire”).
Once again, Opeth have managed to produce a sophisticated dark epic, with lyrics that are generated from Occult but have great emotion and beauty in them.