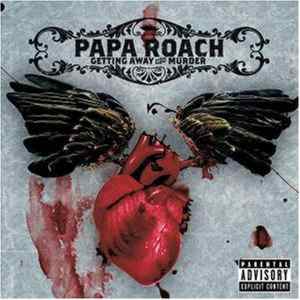 Papa Roach - Getting Away with Murder - [Geffen Records]

Hearing the name Papa Roach takes me a few years back- to when I first heard “Infest” (2000).
It had a good combination of post-grunge (and would even root back to puck or hardcore) with rap-like singing.
Since “Infest” (which I consider to their best one yet) the band has been through a few changes.
The rap was almost completely out aside in 2002’s “Lovehatetragedy” (excluding a couple of songs that did have a touch of it) so to define them as skater-punk-rock was truer than ever before.
Another manifestation was the vocalist’s decision to go back to his birth name; from Coby dick to Jacoby Shaddix.

In “getting away with murder” it’s an entirely different story- here it’s about a very produced and clean sound.
Comparing it to the likes of “Good Charlotte” is more than needed due to the adoption of Emo-core into Papa Roach’s punk-rock.
This is not the kind of Emo-core that Weezer or Jimmy Eat World do, but a borrowed tone and the feel the lyrics have.
The lack of original riffs and the low mixing of the guitar don’t show Jerry Horton at his best, where did the “Infest” groove go?
Tobin Esperance’s (bass) presence isn’t really felt throughout the album, unless you count the title track which has a Korn feel to it.
Drummer Dave Buckner isn't much of a virtuous- not that he is expected to be within this genre- but he could use better entrances and passages.
Jacoby’s vocals have improved and the backing vocals by the rest of the band contribute as well. The problem is his ability isn’t used enough- so “I’m angry at everyone” lyrics just don’t cut it without the right emotional voice change.

I find it a bit difficult to come up with highlights; I guess the opening track, Blood (empty promises), is good because it’s catchy and combines clean and screamed vocals (a’-la- Funeral for a Friend).
The title track isn’t bad either- perhaps because of an odd closeness to Nine Inch Nails's sound.
It’s follow-up, Be Free, starts in a minimal fashion consisting lyrics about the bad side of alcohol- my biggest problem with this one is the use of “sick and tired of being sick and tired” which some may recognize as an Anastasia rip off (?!).