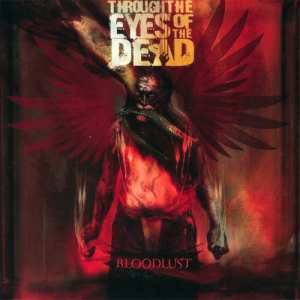 Through The Eyes Of The Dead - Bloodlust - [Prosthetic Records]

Benefiting from a really good production job by Jamie King (Between The Buried And Me) the album sounds great, I've heard some friends complaining about the drum sound, but I think this is what death metal with old-school tendencies should sound like, it shouldn’t sound over produced, and have that Colin Richardson trademark of super clean sound, I think this fits the band just right.

One complaint though about the lyrics, they may be well written and intelligent enough, but the way they're written in the CDs booklet makes for a really tough time reading them, since the actual vocals repeat and twist around the written lyrics, causing some confusion on what the hell is he singing now..

The album contains some brilliant guitar work, duel melodic death riffing that works great, especially in such track as Beneath Dying Skies, that even features an atypical galloping power metal riff in its middle section, extra kudos go for the lead work as well, a really good example of one is in When Everything Becomes Nothing, with some great cymbals work by the drummer during the lead section as well.

The drumming actually deserves a mention of its own, it's monstrously aggressive, and the double bass speed and sound in Two Inches From The Main Artery is classic American death metal at its best.

They certainly do not sound dated, though, there are some Cannibal Corpse ideas in the music, and definitely quite a few At The Gates riffs here and there, but the different shouted vocals tend more towards hard core most of the time, while also using a deeper, death metal growl as well, another thing is the band's relatively high sophistication in the music, certainly not a trademark of early 90's death metal.

The metal scene is currently flooded by metal core and modern death metal bands, and Through The Eyes Of The Dead might be lost somewhere in this heavy torrent, that would be a shame, since Bloodlust is a quality release, with its share of brilliant moments.