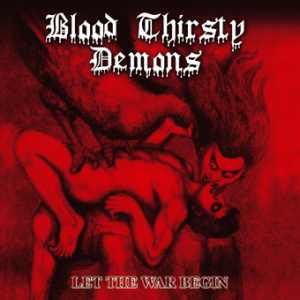 This is a strange beast indeed.

I would generally categorize this is old-school metal, but its hard to say exactly what kind of metal, mostly thrash, but it’s a very strange album indeed.

I'll start with the only thing that bothered me on the album, the vocals, they do make the old-school feel stronger, but they cannot carry some of the melodies the vocalist is trying to convey, I would recommend a deeper, perhaps a harsher, shouted approach rather then a clean one, it sounds a bit too soft for the music.

The music is another matter, is a simple, rather brutal combination of early 80's influences, with some black and doom moments thrown in, great sound and amazing drumming serve the album very well, though the drums sounded so clean at times I had to check if its actually a drum machine, which its not..

The title song and the track Blood Thirsty Demons brought to mind early Celtic Frost and certain Death SS influences, another thing that brought to mind Death SS is the use of bass for the melody lines, the guitars are lower in the mix then the bass, giving the album a somewhat avant-garde feel to it, a lot like what Death SS had in their albums.

The band's appearance also brings Celtic Frost and Death SS to mind, a rather gothic, black metal look, and that is what the music conveys as well.

Its all done with a single minded flare and some great aggression, with track such as Black Solitude actually giving a more Merciful Fate vibe, kind of doomish and depressive.

A good release, not doubt, they just need a bit of a harder edge, and the next one would be a great release.