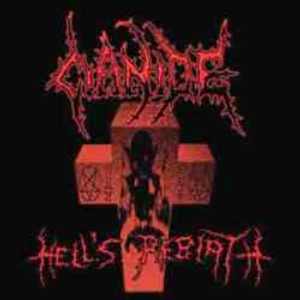 Old school, ladies and gentlemen, either you like it, either you don’t.
This CD reminded me of the time in the early 90's when we used to swap demo cassettes with bands from all over the globe, cassettes with a logo painted by a talented friend of the band with an equally rubbish cover painting.

This album, at first glance, looks exactly like that.

It even sounds similar, I would describe it as old school death metal, which is so simplistic and raw at times it sounds either as old hard core, or a rawer version of early Motorhead. Yes, its that raw.

The band uses one guitar, one bassist who's also a fine growler, and a drummer who achieved my favorite "Took-Took" double bass sound I was so fond of in the old death metal albums, and they use mostly simple death metal riffing and basic song structers, something that sounds great at times, and in a track or two-a bit boring.

First track is a great one, fast, simple, great growls, it starts in a bang and ends in a flash, but it’s the next one that's one of my favorites, Death Metal Maniac is a true old school anthem if there ever was one, again, basic and good.

Its songs like Trust No One that I wasn’t too keen on, no real hook there for me, and there are about two or three of these lying around, again, the old school crowd would probably enjoy them, but I need a bit more.

Curse Of The Dead delivered that "more" I needed, a catchy, dynamic guitar riff in the verses, solid chorus, it sounded to me like a less thrashy version of Incubus's Massacre Of The Unborn, simple structure that turns a track into a winner.

All in all, it's quite a gem for all those old school people out there, and it brought a tinge of nostalgia to my heart, it has a few off moments, but the really good tracks carry the album through.