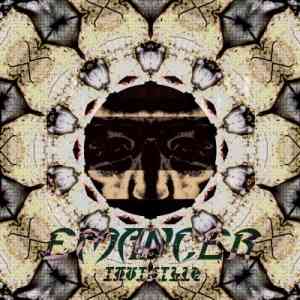 I would define Emancer's music as avant-garde black metal, but the term would probably be stretched at times.
The band, actually consisting of two talented individuals, creates a combination of primitive back metal with more progressive black, at times reminiscent of Arcturus, but the usage of a drum machine also brings to mind some more industrial elements.

The fact that most songs cross the 7 minute length, and still manage to retain my interest speaks for itself, the band goes to great lengths in order to paint the songs with riffs and textures that are anything but expected.

The sound on the album is clear, a bit under produced at times but it still comes through for the band, the drum machine sounds like one, but that may be intentional, so the band sounds a bit more cold and industrial, something they certainly achieve.

The first track, Emancipation, builds up several great riffs, and good ideas, using typical shouted black metal vocals, but incorporating them in a very un orthodox environment, several of the black metal riffs on the track are brilliant, the one near the track's end is a classic example of a primitive black metal riff that carries aggression and ferocity to a prefect extent.

On Borrowed Time is almost progressive metal in its variety of sounds and riffs, the use of some clean guitar in its midst sounds almost psychedelic, and accentuates the band's diversity further, again, its actually the black metal riffs that serve the song best.

A Comedy Of Hunger crosses the line at times, making me think of the band as something which is completely un-black metal in nature, but then they throw in the black metal riffing and vocals and change the picture.

All in all, it’s a good release, a bit hard to sallow at times, and certainly not for the more simplistic black metal aficionados, but for the more open minded metalists out there, it’s a treat.