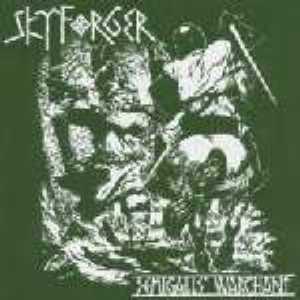 If looking at the growing number of folk or pagan metal bands in the world from an anthropologic point of view, I would be bound to state that something is going on, and it seems like either bands are discovering their musical roots and deciding to combine them in the traditional metal they create, or that as a backlash to the European union and the disappearing of national borders in Europe, bands are becoming increasingly nationalistic and isolated.

But since this is not an anthropological mag, I'll stick to reviewing Skyforger from a strictly musical point of view.

The band has been in existence since 95', initially creating a form of primitive black metal, unlike that which rose to fame in Norway in the beginning of the 90's, with some folk influences taken from their home country of Latvia.
The band later evolved into a fully fledged fold/pagan band, and achieved a high degree if professionalism after releasing four albums, this release, is actually a re-release of their demo, to which was added a new EP, containing four new songs.

The first part of the album, the demo, is primitive black metal, with some folk thrown in, featuring some dark, atmospheric music, and black metal vocals not dissimilar to those used by Vondur a long time ago, the re-mastered sound is actually not bad, and the strength of the band is evident, with some good riffs and a solid song-writing ability.
Werewolves and Chief Nameisis are good example of Norwegian style black metal done well by a none-Norwegian band, it has the same cold, misanthropic feel to it.

The EP is something quite different, professionally played and recorded folk metal, with growled, mid-range vocals, a solid sound, great guitar work, and some original instruments that fit in well.

It brought to mind such bands as Moonsorrow or Finntroll, and the band's current direction is certainly very enjoyable.
This release has something for both purely fold metal fans, and also for black metal enthusiasts, and I did enjoy it.